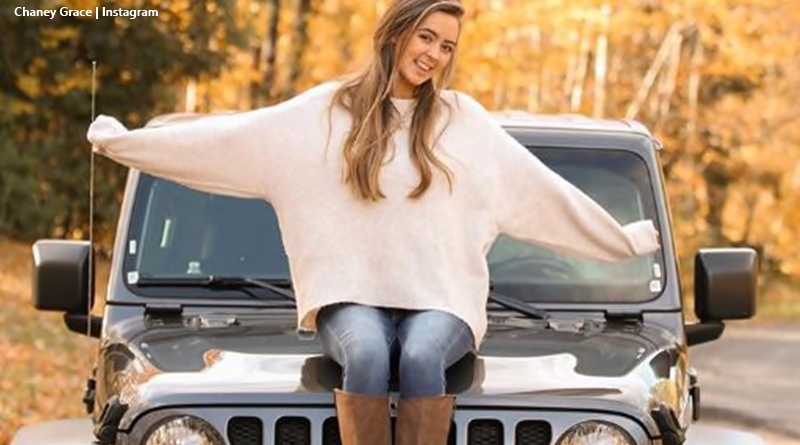 Bringing Up Bates fans heard that Chaney Grace started dating Trace Bates in September. Later, TV Shows Ace confirmed that fans think she’s “super-cute.” Plus, she demonstrates a sense of humor. Now, she took to Instagram and showed that funny side with an amusing post giving advice to fans.

In our article, we related how Chaney Grace’s sense of humor makes her sound a cheerful and fun character. That should also appeal to Trace, who’s often quite funny on the show. Chaney took to her Instagram to talk about fall fashions. Wearing overalls, she commented, “Overall, I guess you could say we’re pretty excited for fall🍂.” Fans found that play on words quite funny.

Then in a tragi-comedy, she shared a photo of her adorable pup. She captioned that one with, “Best buds 4 life (only because he just broke his leg and relies on me to get around).” The newest addition to Bringing Up Bates also made a funny comment on a post in October. Sharing a photo of alpacas she said, “Wanna go to the alpaca farm? Alpaca my bags😉.” Okay, we get it, Chaney’s got an amusing if sometimes dry sense of humor. Now, she shared that humor again about Thanksgiving.

Wanna go to the alpaca farm? Alpaca my bags😉

Thanksgiving’s nearly here and Chaney turned her thoughts to it. She gave some advice to fans about dealing with it. She shared a post of her looking fresh and countrified. Her caption read, “Thanksgiving is coming… remember to set your scales back ten pounds next week🥧.” Fans of Bringing Up Bates responded to her amusing advice. One said, “Hahahah 10/10 caption!” Another noted, “This is the best advice ever 😂 Now can I do an extra 10 lbs on top of that since I’ll be eating for 2? 🤪😂😂.”

Well, Chaney doesn’t look like she needs to worry too much about over-eating during Thanksgiving. She looks stunning even wearing boots, a gigantic sweater, and jeans. People also like it that Chaney always takes the time to respond to even the banalest questions about where she bought her boots or her sweater. Naturally, such a nice person could make Trace a very happy man. So, fans are on the watch for announcements.

Trace introduced Chaney in the show

Knox News reminds us that Trace introduced Chaney to his family at their annual Valentine’s Day party. In the episode, Carlin said, “Trace up and did what all of us thought he wouldn’t do. He showed up with this female girl, and she’s gorgeous.” Yes, fans agree with Carlin on that. Chaney’s fast becoming a favorite personality in the Bates family.

What do you think about Chaney Grace sharing some amusing advice for Thanksgiving? Do you think her funny and dry sense of humor totally suits Trace? Sound off your thoughts in the comment below.