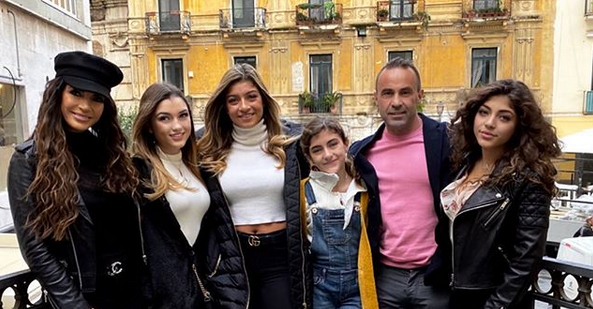 Teresa Giudice is going to defend her husband Joe Giudice no matter what. The Real Housewives of New Jersey star made an appearance at this weekend’s BravoCon alongside her costars. She was asked during a panel what she thought of Joe’s behavior as of late. Teresa defended Joe’s tough-guy act on the series, especially during the couple’s sit-down interview on Watch What Happens Live with Andy Cohen. As previously reported via TV Shows Ace, Teresa shared her thoughts on Joe’s deportation.

Apparently, she’s used to him and his bad guy behavior. As previously reported via Yahoo! Entertainment, during the BravoCon panel, Teresa exclaimed that she’s “used to Joe” and how he acts. She’s familiar with his macho-man behavior, so she doesn’t let it get to her. Teresa shares four daughters Audriana, 10, Gabriella, 15, Gia, 18, and Milania, 13 with Joe. She explained that Joe’s behavior behind the scenes is different from the macho act he portrays on television.

But she went on to explain that if he ever acted out of line, then she would put him in his place.

“On the show, he would act like a macho guy. I would never take that. The way you saw him on the show being an a******, he wasn’t like that in person. When we were one on one around the kids, he wouldn’t act like that. But around the people, he acted, however he acted. Otherwise, I wouldn’t put up with that s****. I would be flipping tables all over the place!” she joked.

Teresa also revealed to fans that being away from Joe for so long has helped her take notice of the two different Joes in her life.

Joe has since realized his mistakes, Teresa claims. Now that he’s been in jail, he looks back on the show and admits his wrongdoings and behavior.

As previously reported via TooFab, Teresa revealed that she and her daughters will be traveling to Italy to see Joe for the first time in four years. Teresa told Andy Cohen that she’s “nervous” about their encounter because she doesn’t know if she still has feelings for him. She admitted that she wasn’t attracted to him when he was in prison and Joe agreed.

Teresa has leaned on her oldest daughter, Gia, during this difficult time. Her daughter has told Teresa that she needs to come to terms with how she feels about Joe once they meet again.

When Joe was asked about how he felt when he saw her in prison, Joe jokingly said, “I might see my wife and be like, ‘Oh you’re too old for me now.'”

That remark got some viewers mad. Even Andy Cohen raised his eyebrows when Joe made that joke.

There were photos of Teresa Giudice holding hands with a much younger man in Miami and of Joe Giudice having dinner with a much younger woman back in April 2015. However, the two have denied being unfaithful during their time apart. Teresa and Joe Giudice seem to have feelings for each other despite their doubts. During the BravoCon panel, Teresa said that their kids are missing Joe very much but she’s happy that he’s finally free.