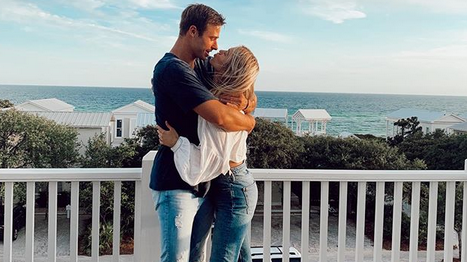 Sadie Robertson and fiancé Christian Huff are one step closer to becoming newlyweds. The couple announced to fans that they got their marriage license over the weekend. As previously revealed via TV Shows Ace, Sadie Robertson plans to get married as soon as later this month. The couple will say their “I dos” at Sadie Robertson’s family home in Louisiana. The couple got engaged in June.

Several weeks after the 22-year-old author celebrated her upcoming wedding with a bridal shower, she revealed on Friday, Nov. 15 that she and her fiancé Christian Huff have gotten their marriage license. It looks like these two are on track to becoming husband and wife. In her new Instagram photo, Huff appears to be sporting a new look, which Robertson joked about in her caption.

“This chapter of life is called marriage license and a mustache and I couldn’t be happier about it,” Robertson captioned the shot of the two smiling wide for the camera.

In the photo, the 19-year-old has his arm wrapped around Robertson, who flashes their marriage license at the camera.

Back in June is when Robertson first took to Instagram to announce that she and Huff are engaged. She told fans that she “screamed YES” to her husband-to-be. Robertson also said that she’s the “happiest human in the world.” The Christian podcaster and blogger praised God in her Instagram post.

Huff asked for Robertson’s hand in marriage after nine months of dating. He wanted to pop the question on her family’s farm in Louisiana, where they’re also hosting their wedding. This special moment came at the perfect time in the couple’s lives as they were both celebrating their birthday that same week. Following their engagement announcement, Robert revealed that she wanted to have “a short engagement.”

Looking at Robertson’s Instagram account, you can tell she’s smitten with Huff. In a revealing new interview with Us Weekly, the former Dancing With the Stars alum revealed why their relationship works. It turns out it’s their steadfast faith that keeps them together.

Robertson also revealed that being supportive of one another helps them grow in their relationship.

“I want him to succeed in all things and he wants me to succeed in other things, and we enjoy doing it together because he’s my best friend and I think that those elements make it really special. I think a friendship is the most important thing in a relationship and ours is really strong.”

Of course, the couple isn’t without their share of troubles. Robertson joked that they have their differences and she’s aware of their troubles, but she has faith that they’ll work it out. Despite those differences, Huff has already won over the Robertson family, including her sister.

Sadie Robertson and Christian Huff are obviously in love and can’t wait to share that with their family. Earlier this month, Sadie already moved into their new home.