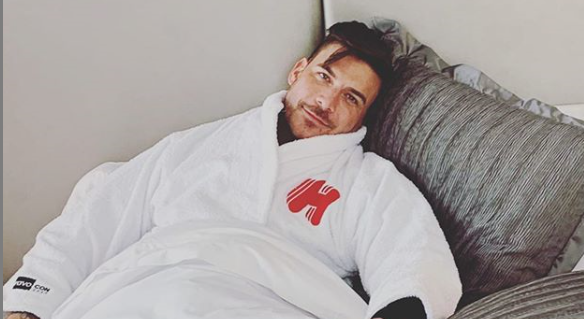 The Vanderpump Rules cast wants to be one big happy family literally. Jax Taylor, Tom Schwartz, and Tom Sandoval are close. They’re so close Jax had their names tattooed on his arm. They all bought houses near each other on purpose so the can continue to be best friends forever no matter how long the show lasts.

Tom Schwartz and his wife Katie Maloney along with Tom Sandoval and his girlfriend Ariana Madix bought houses in the same area as Jax Taylor and new wife Brittany Cartwright. Rumors have swirled recently that Brittany is pregnant and the two have made no denials they want kids soon.

You are going to cuddle with me and like it!! @spoiledmonroe 💟

Jax Taylor Is Serious About His Best Friends

According to People, during a BravoCon panel Jax Taylor said, “we want our kids to grow up together, we spend more time together off the show than on the show.” When he purchased the new home, he posted to his Instagram. His wife Brittany posted the she felt very blessed about moving into her first home with Jax. The Vanderpump star said, “we are growing up, moving forward, and working on our forever happiness.”

She said she cannot wait to be a mom and Jax can’t wait to be a dad. They talk about it all the time. Cartwright said it surprised her that Jax is more excited about kids than she is. Jax has said, “I want to be a soccer dad, a gymnastics dad, whatever it is. I just want to be a part of it all.” With all the reality stars in their thirties and forties fans think it will be soon a baby boom will take over SUR. Good thing there’s new staff to take over when the staff switches late night drinking for late night feedings.

Tom Sandoval made a point to address the feud he recently had with Jax Taylor. According to the Inquisitr, Jax blocked most of the people on stage while filming Season 8. Stassi Schroder asked her co-stars, “raise your hand if you’ve been blocked by Jax.” Most of the cast raised their hands. Several people in the audience also raised their hands.

Sandoval’s shirt said, “blocked by Jax on Twitter.” Fans won’t know what the tiff was about until the new season comes out. Apparently, all is well now since they want their kids to grow up together. There’s a chance before the reunion rolls from Season 8 he may block them all again.