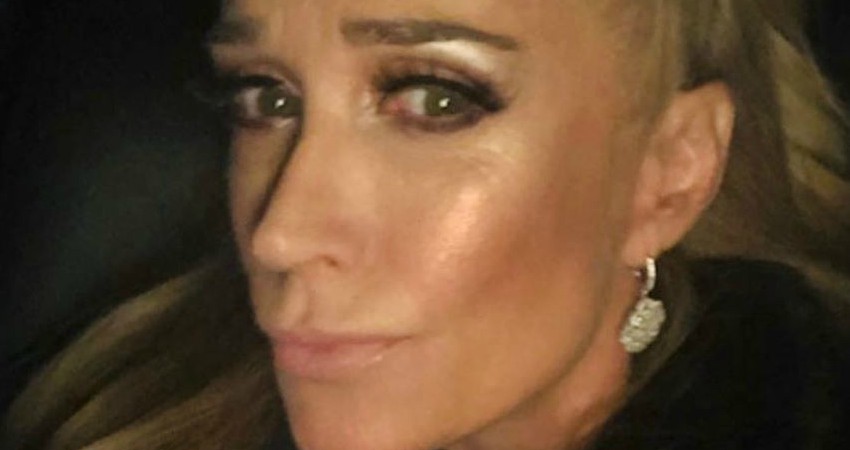 Kim addressed the demise of Lisa Vanderpump’s friendship with sister, Kyle Richards. She also revealed to fans how a recent health scare changed her life.

RHOBH Star: “They Found Something” During Mammogram

People reports that during the RHOBH star’s routine mammogram, the doctors “found something.” As fans know, Kim and Kyle’s mother passed away at an early age from breast cancer. As a result, both women are outspoken about the importance of mammogram screenings for women. Therefore, it’s no surprise that Kim’s health issues put her life in perspective.

To help her deal with the traumatic experience, the Bravolebrity started visiting a neuroscientist who helped her see her true self.

While speaking about her recent health scare, Kim revealed she’s under treatment with a neuroscientist. Her “spiritual activator” promotes spirituality, meditation and self-reflection.

“These men changed my life. I do their webinars and live-streams and I go to bed at night and can’t wait to wake up in the morning. I literally saw who I was, who I became and who I am today. I realized, you know, I didn’t really ever know who I was.”

The embattled reality star went through an often-hidden addiction during her time on the show. Back in 2015, Kim was arrested for DUI. She seems to have made a lot of progress in her recovery.

“But now I love me. I’ve never been happier.”

RHOBH Star on Sister’s Feud with Lisa Vanderpump: “I Hope They Can Make Up”

Season 9 of The Real Housewives of Beverly Hills saw the friendship between Lisa Vanderpump and Kyle Richards deteriorate to the point of no return. While Kim only appears on RHOBH in the occasional guest role, she saw firsthand how tough the situation was on Kyle.

Ultimately, the tension caused Lisa to announce she won’t return to RHOBH for Season 10. Speaking to Reality Tea, Kim wonders if some of the other cast members put pressure on Kyle to end her friendship with Lisa.

“I feel like maybe there was a little pressure from the other girls.”

Despite Kim’s tenuous relationship with Lisa, she remains hopeful that Kyle can reconcile with the restaurant maven.

“I wish they would make up because they were besties for so long. There’s a love in there that just doesn’t go away.”

Meanwhile, it seems that Kim is putting her new kumbaya attitude into her own tense relationship with Kyle and their sister, Kathy Hilton. After years of a reported feud, the three reunited on Kyle’s Instagram. A video of Kyle, Kim and Kathy singing along to “Hold On” at a Wilson Phillips concert. The caption referenced their late mother: “I know Mom is happy now.”

As for Kim’s cancer scare, she is still waiting for the last results. However, she has an optimistic outlook.

The Real Housewives of Beverly Hills is currently filming Season 10. TV Shows Ace reports that Kim might be making a guest appearance. Season 10 will air sometime in 2020 on Bravo.

Josie & Kelton Balka Bond With Daughter Willow While Baby Is In NICU
‘General Hospital’ Spoilers Reveal Cyrus Is Gone, At Least For Now
What Does Jacob Roloff Do For A Living & Does He Still Live In A Van?
Rivers Waldrop Rushed To Hospital After Nasty Fall
Proud Mama Jill Dillard Bragging About Samuel’s Huge Accomplishment