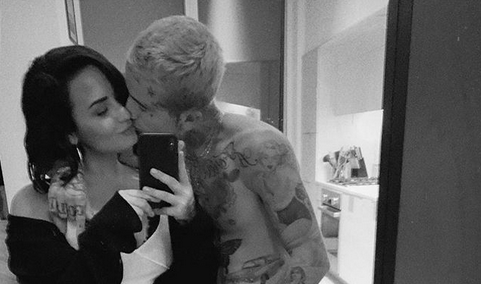 Demi Lovato has a lot of new things going on in her life. She and her boyfriend Austin Wilson became Instagram official. She teased new music in a recent appearance. Demi Lovato is also gearing up for her guest role on NBC’s Will and Grace.

Demi Lovato shocked fans when she shared two new selfies of her with a mystery man. That man turned out to be her new squeeze Austin Wilson. Lovato’s previous relationship with Henry Levy abruptly ended, but she didn’t let that get to her. Rumors swirled that Lovato was dating Mike Johnson of The Bachelor fame, as previously reported via TV Shows Ace.

Now it looks like Lovato has since found love with Austin Wilson, according to The Hollywood Gossip. Fans assumed that it was Justin Bieber in the photo but considering that the Biebs is happily married to Hailey Baldwin, that would’ve caused quite the scandal. Then fans realized that Lovato is happily attached to the male model from Los Angeles. The two are said to have strong feelings for one another. Wilson also referred to Lovato as his “love” in his Instagram photo.

So, who is Austin Wilson? He’s known for posing for various fashion shoots and sporting tattoos from various local tattoo artists. The two are said to have grown close after they were grief-stricken from the loss of their mutual friend earlier this year. Both Lovato and Wilson have gotten tattoos to commemorate their friend.

Lovato has also taken to Instagram to tease her upcoming episode on Will and Grace. The series is coming to an end after it found new life through a reboot. In one of her Instagram Stories, she’s seen rocking Justin Bieber’s new “Drew Merch” clothing line while filming for the NBC sitcom. This paired with Lovato’s latest Instagram photo is probably what sparked the Justin Bieber dating rumors.

The final season hasn’t been without its share of drama backstage. There have been reports of an alleged feud between Debra Messing and Megan Mullally that has turned the cast against each other. This alleged feud has also caused the viewers to turn away from the show. But the ratings could get a boost since Lovato is joining the cast soon. She will be one of the many guest stars that’s expected to hit the NBC show, according to Dankanator.

Demi Lovato glows as she shows support to @justinbieber’s ‘Drew Merch’ line while filming her episode for ‘Will & Grace.’ pic.twitter.com/I24hxdll3H

Lovato’s appearance is said to happen at a time when the Will and Grace feud is at an all-time high. But the news of her joining the show could be a good thing. It could help the cast mend ties with each other and provide a much-needed distraction. It’s also the first time that Lovato has acted in four years since her 2015 appearance in From Dusk Til Dawn: The Series.

‘Bachelor Klan’? Rachel Lindsay Burns Bachelor Nation To The Ground In Searing Interview
‘Renovation Island’ Resort: Why Was It Shut Down?
Kaitlyn Bristowe Reveals All Past Plastic Surgery Procedures
Did You Miss This JonBenet Ramsey Reference In ‘Cruel Summer’?
Ariel Winter Puts Cleavage On Display In Shirt With Plunging Neckline