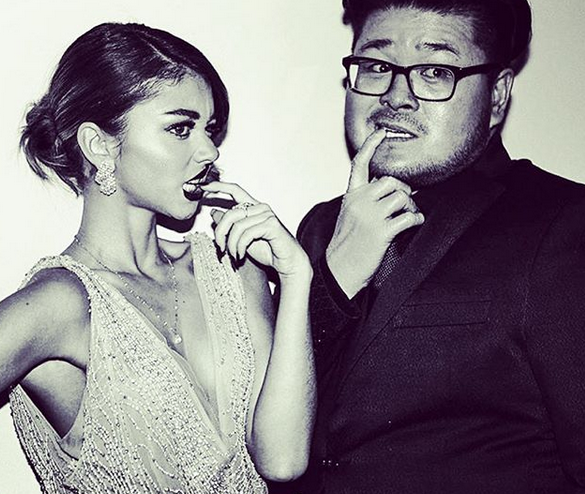 Sarah Hyland’s fans are conflicted over the Modern Family star’s latest photo. Some believe the photo crossed the line. Sarah Hyland was seen partying with fiancé Wells Adams at a wedding. The two are very much in love and love enough to flex it on the ‘Gram. However, some of Sarah Hyland’s fans think the photo was inappropriate in lieu of the #MeToo movement.

The controversial photo in question showed Hyland sticking her tongue out at the camera while Adams grabbed her right breast. The caption read, “We take wedding photo booths very seriously… #mcm to the men who love and treat their ladies like queens.”

The caption combined with the photo didn’t sit well with fans. Hyland’s Instagram feed turned into a heated debate over how men and women should act following the #MeToo movement, as previously reported via The Blast. The photo is NSFW in nature, and featured the guys getting handsy with Hyland and her friends. However, the group was obviously having a good time at a wedding, where the drinks flow and hijinks ensue. The photo was obviously taken in fun, and everyone seems to be consenting to the act.

However, some of Hyland’s fans thought it sent the wrong message to girls. Others questioned the caption itself, wondering if Hyland meant that being treated “like queens” meant being treated like objects. The backlash was too much for social media, and Hyland has since removed the comments. But she hasn’t removed the photo, as it remains on her Instagram account.

Some fans come to Hyland’s defense

Other Hyland fans have since come to her defense. One argued that people’s comments over the photo controversy were worse than the photo itself. Another argued that the #MeToo movement was about women who were sexually abused by men in power, while the women in the photo were consenting. Other fans wished that their significant others were as handsy as Adams himself.

It’s no secret that Hyland gets candid on social media. She’s given fans an up-close and personal look at her relationship with Bachelor alum Wells Adam. According to a previous report via GMA, she even documented her entire tattoo removal process on Instagram Stories. She shared several videos of celebrity skin expert and nurse Jamie Sherill removing some of her tattoos. In the videos, Hyland appeared to be in pain as she documented the deeply personal process.

Are Sarah Hyland and Wells Adams ready to say, “I do?”

In the meantime, Hyland and Adams are engaged, much to the shock of many. As previously reported via TV Shows Ace, they celebrated their surprise engagement a few months ago. During an Emmys party back in September, Hyland revealed that the two have grown so much in their short time together. And now it looks like Hyland and Adams are finally talking about their future together.

Well, sort of. As previously reported via USA Today, Hyland revealed at E!’s 2019 People Choice Awards that she and Adams are not in a rush to get married. They’re obviously enjoying being engaged. But she did attend a bridal party, which she showed on Instagram earlier this month. Hyland and Adams announced their engagement back in July.

What are your thoughts over Sarah Hyland’s controversial photo? Do you think it deserved the backlash it received? Share your thoughts below in the comments section. And don’t forget to follow TV Shows Ace  to get the latest news about your favorite TV stars.