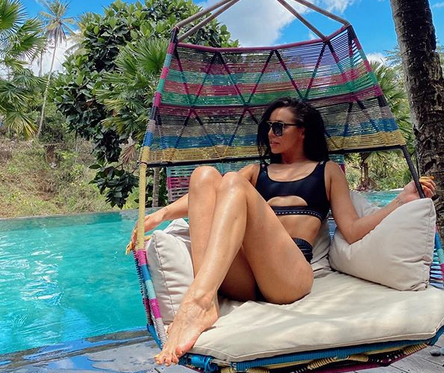 Vanderpump Rules star Scheana Shay is off the market once again. The reality star has reportedly found love with her personal trainer Brock Davies. The 34-year-old made an appearance at the 2019 E! People’s Choice Awards in Santa Monica, California alongside her Vanderpump Rules cast members on Sunday, Nov. 10. On the red carpet, Shay coyly revealed to reporters that she’s not exactly single.

It didn’t take long for her to reveal that she’s off the market. However, Shay wouldn’t reveal who she’s dating. In fact, Shay refused to give any more information since their relationship is said to be very new. The couple just celebrated their two-month anniversary last week. But it seems that the couple is serious about each other since they traveled to Australia and Bali together. Shay excitedly told the reporters that her boyfriend surprised her with the exotic trip.

Shay wanted to stay tight-lipped on the identity of her boyfriend during the red-carpet event. However, according to a previous report via Us Weekly, Shay is said to be dating personal trainer Brock Davies who hails from Australia. The two were introduced to each other through “mutual friends.” Shay’s other friends haven’t met him in person, only on FaceTime. Shay’s Vanderpump Rules costar Kristen Doute told reporters that while she hasn’t met him in person, she already likes what she’s heard about him.

The only other Vanderpump Rules costars who have met him are James Kennedy and Raquel Leviss. Kennedy called Davies a “hottie” at the PCAs. The two just met when they got ready at the house for their big night. Leviss spoke to reporters at the awards show, saying that Davies “tricked” his Shay into going to Bali. Shay originally assumed they were going to Australia, but he surprised her with a plane ride to Bali.

The one friend who has probably met Davies is Shay’s new best friend. However, Shay has found the right best friend. As previously reported via TV Shows Ace, she has found friendship with Janet Elizabeth. The two have grown close over time. And it’s likely that Elizabeth will appear on season 8 of Vanderpump Rules.

Has Scheana Shay found “the one” this time around?

How did Shay end up crossing paths with the Australian hunk? Well, Davies owns two F45 training studios in California, which her friends are familiar with. He also plays rugby on his downtime. It’s likely that Shay has checked them out and wanted to know more about him.

Shay was previously married to ex-husband Mike Shay from 2014 to 2017. She then went back to her ex-boyfriend Rob Valletta before she was connected to The Bachelorette alum Robby Hayes. She was also rumored to be dating her Vanderpump Rules costar and co-worker Adam Spott. Despite her confusing dating life, Shay says she feels like she’s been “single for so long” because she hasn’t found the right man yet.

She feels different this time around. Shay has finally met someone who treats her the way she deserves to be treated. While it’s obviously too early to tell, Shay feels like this guy could be the one she’s been looking for. She wants to see where their relationship takes them and how it progresses from here.

Don’t forget to follow TV Shows Ace for news on Scheana Shay and the rest of the Vanderpump Rules cast.