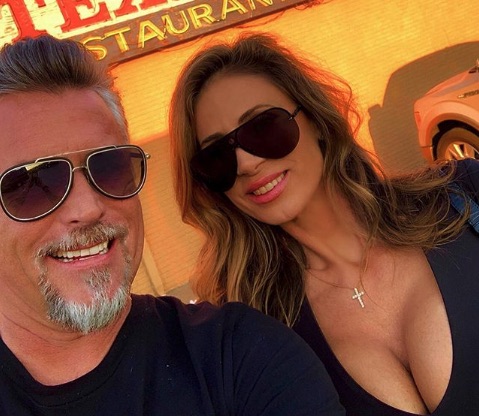 Richard and Katerina have been celebrating. Recently, TV Shows Ace reported that Katerina Deason was born on November 5, 1967. Richard, who just turned 50 in March, is 18 months younger than his intended bride, Kat. But age is an attitude. Kat is as photogenic as Richard and the couple is clearly happy in love.

How did Katerina and Richard celebrate her birthday? In Vegas, baby! They stayed at Caesar’s Palace in a pretty shmanzy room. They were already there for SEMA, But it was not until November 6 that Richard posted on Instagram to celebrate.

“I was in full SEMA mode yesterday and I didn’t get the chance to post about a special someones Birthday! Happy Birthday @katd488, thanks for always bringing laughter and joy into every moment of every single day of my life. Huge thanks to @caesarspalacew for making her Birthday a great one!”

TV Shows Ace had reported that Richard and Katerina were engaged back in August. Richard got down on his knee while they were vacationing at their favorite Tulum, Mexico resort area, in Quintano Roo, Mexico. They shared their vacation with Richard’s sister, and Fast N’ Loud star, Daphne Rawlings Kaminski, and her husband Ken Kaminski.

Fans of the show know she is the Gas Monkey money wrangler, but she clearly has a soft spot for Richard’s lady. She shared that they were “blessed” to welcome “angel” Kat to the Rawlings clan.

When is the wedding? Neither Richard, nor Katerina have shared a date or details. Although they are traveling together, it doesn’t appear that they are living together. A week ago, Rawlings posted a photo of a doormat. His caption joked, “I may be engaged, doesn’t mean I can’t keep some of my bachelor lifestyle.”