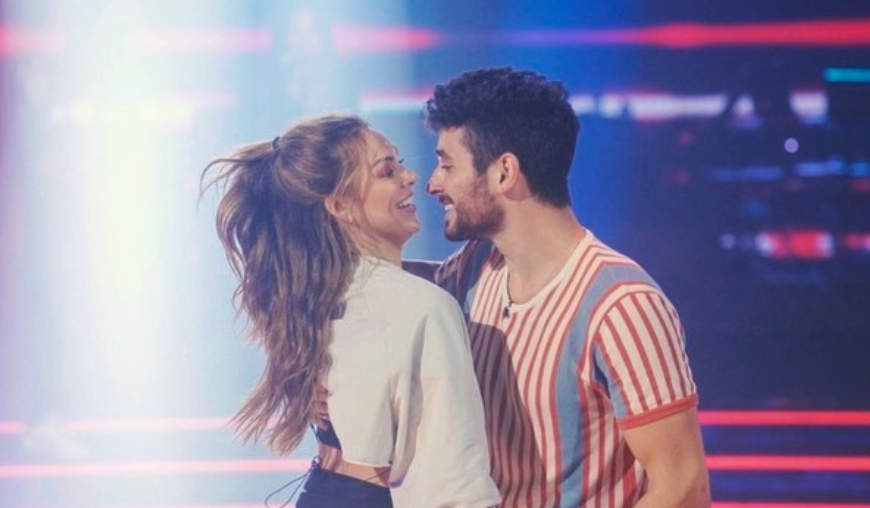 Alan Bersten and Hannah Brown have had their ups and downs this season of DWTS. Last week, not only did they experience a major up, but Alan revealed what all they do before they take the stage and dance.

Everyone has to have a pre-show ritual and Hannah and Alan aren’t any different. According to Showbiz Cheatsheet, there’s something the pair always has to say before they go on.

“Hannah sometimes gets nervous right before we go on, but this week I tried to take away all the pressure and just enjoy the dance. I think it worked! We also scream “Woooooo!” really loud before we dance to calm the nerves. It gets us going!” Alan wrote.

Hannah in the past has been getting too nervous to perform really well. This time Alan tried a new tactic to get her head in the game and melt the nerves away. Apparently, they don’t do anything before going on stage other than focusing on their own performance. They don’t even watch the pre-dance package that is shown.

“It’s all about focusing on the dance. I still don’t like to watch the packages before the dance — I just like to stay connected with Hannah and focus on having a good performance,” he admitted.

These ideas seem to work as Hannah had one of the best weeks on the show so far. Even the judges noticed calling last week her comeback. That’s really surprising considering this week she had to learn two dances. But, it’s clear she finally got away from the nerves and really just rocked out onstage – literally. She even had an air-guitar solo.

That was a freaking blast. Thank you @alanbersten for a fun week. And THANK YOU ALL for accepting a little piece of my heart I left on the ballroom for you guys—so glad we will be back next week!

What else did they do?

The other dance she performed was salsa against Lauren Alaina and Gleb Savchenko. Alan said Hannah has never done salsa before so this was rather challenging. However, she clearly didn’t let that stop her. She danced on stage like she’s been doing salsa for years.

According to Alan, all of Hannah’s work has really been paying off and he’s happy to have her as his dancing partner. How sweet is that?

oh yeah, all right. let’s do this thing @alanbersten 🇺🇸🙋‍♀️

“I can’t say enough about how incredible Hannah has been and how hard she is working! She doesn’t leave the studio until she feels good about the dance, which is great because I can see how much she wants this,” Alan said.

Do you want to see Hannah Brown win DWTS? Let us know who your favorite dancers are in the comments below. Be sure to watch new episodes every week and come back to TV Shows Ace for news on all of your favorite celebs.

Did You Miss This JonBenet Ramsey Reference In ‘Cruel Summer’?
‘Bachelor In Paradise’ Spoilers: Reality Steve Gives Mid Filming Update, Reveals The ‘It’ Couple
Duggar Cousin Amy King Offends All Her Male Followers With One Post
OMG! Is Kendra Caldwell’s Parents’ New Baby Okay In This Photo?
‘Too Hot To Handle’ & ‘Love Island’ Premieres Will Battle For Views