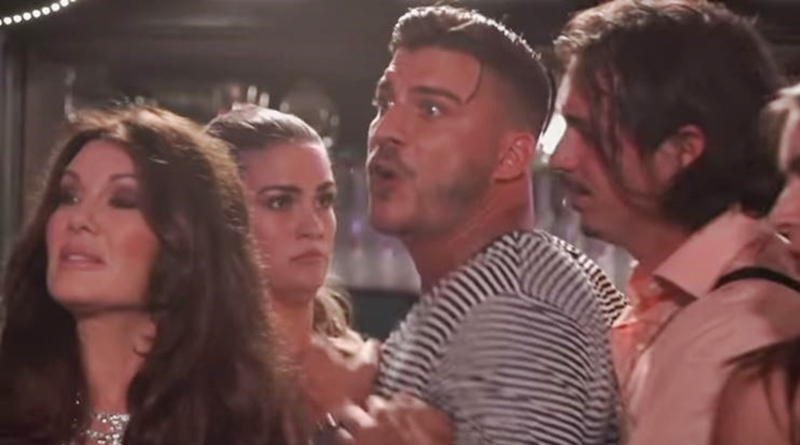 Vanderpump Rules star Jax Taylor comes across as quite the man on the Bravo show. But, he’s not a reckless one. In fact, he’s that cautious that he won’t swim in the sea anywhere in California. And, he revealed that he’s very aware of sharks. Jax talked about it on Instagram and on Twitter.

Vanderpump Rules – Jax the tough guy when it comes to people, but not with sharks

Jax mixes it up with both the cast of the show and with random strangers on social media. He comes over as a tough guy with people, but when it comes to sharks, he’s not so tough. TV Shows Ace reported that recently, Jax attacked a random stranger on Twitter, it all became nasty when fans accused him of homophobia. Not that any criticism stops him from returning to social media. This weekend, he went onto a post on Instagram about sharks and shared his thoughts there.

The post by @discoversharks showed a young great white shark hanging around a boat offshore of San Clemente. Shot by Kevin Mattson, it shows the shark getting really close to some guys. One of them had a go-pro on a stick to try and film it. At one stage, the shark even rocked the boat. The Vanderpump Rules star commented, “And this is why I will not get in the water in California. #whitesharkbreeding season. Look how close to shore that is.”

"Close encounter with a white shark in California. 😎 Videography by @kevin__mattson"

Fans and Jax talk about his fear of sharks in Cali

Fans who commented on Jax’s post mostly thought that he was very sensible. Others, full of bravado suggested they would touch the shark and said that it’s just a baby. But some people agreed with Jax that it might be young, but it’s big enough to do harm. Plus, they come inshore to feed. One fan grew concerned as it was quite close to the beach and their brother surfs out there.  Sharing Jax Taylor’s sentiments, one person commented, “Close to shore looking for grub….a bit more common these days or just more recordable. Either way, get out the way!”

Meanwhile, over on Twitter, Jax and Vanderpump Rules fans talked a bit more about his fear of swimming in California. One said to Jax, “Yeah no thank you… I don’t need any sharks eating me for dinner!” Jax said he loves Florida, but he’s also cautious of sharks there. One fan asked Jax, “Do you like Cocoa beach?” Jax replied, “Sure do! Lots of sharks though, they don’t talk about it cause it scares tourism but at one point cocoa beach had the most shark attacks in the world. #scary”

Sure do! Lots of sharks though, they don’t talk about it cause it scares tourism but at one point cocoa beach had the most shark attacks in the world. #scary https://t.co/L85AqhMDSA

What do you think about Jax Taylor being so scared of sharks that he won’t swim anywhere in the ocean in California? Do you think he’s sensible, or just plain paranoid? Have you ever seen any sharks along the beaches in California? Sound off your thoughts in the comments below.