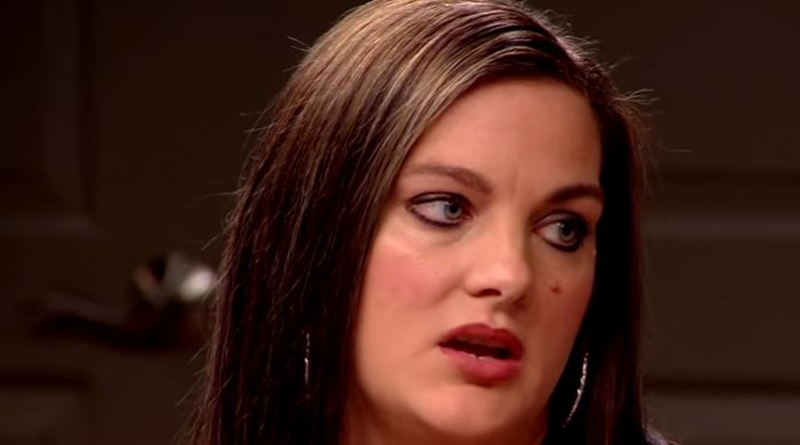 Unexpected star Caelan Morrison started his own YouTube channel on October 25. There, his first video addressed questions from his Instagram followers. Now, his mom, Shelly Morrison announced that she also plans a YouTube Channel. It came when the Tell-All kicked off, and hopefully, she reveals some stuff we never saw on the show.

Fans of the TLC show know that McKayla Adkins treated Shelley’s mom really badly this season. We saw her awful behavior when Shelly went to meet her grandchild. TV Shows Ace noted, “Well, you can imagine that the bad vibes didn’t pass unnoticed by his mom Shelly. In fact, she said, “my two moments as a grandmother and they’re all about ruined.” McKayla said she pushed Shelly away as she didn’t like her “negativity.”

Well, pretty much, fans thought that Shelly just told McKayla the truth as she’s always dictating to everyone around her. They feud quite a lot, and Starcasm reminded us that even Shelly’s sister Shari got dragged into it. Plus, at one stage, Shelly had to help Caelan get a court order to allow him access to his own kids. After Caelan got visitation rights, we noted that the couple got back together again. Over on his YouTube fans can’t get over that. But, no doubt, Shelly stays close-by ready to intervene if necessary, on the Unexpected baby daddy’s behalf.

On her Twitter, Shelly’s quite upbeat about things, and shared, “Starting a new journey tomorrow can’t wait!!” Well, she never said what the journey was unless it’s getting her life back after the cameras stop rolling. But, over on her Instagram, the Unexpected Mom revealed she plans on launching a YouTube channel. Her post got captioned with, “YouTube in the making with cheers and toasts with these two 😱 😜 coming soon to a channel near you .”

Of course, fans of Shelly love the idea. One replied, “You have my attention. Lol!” Another noted, “I’ve been waiting for your story!” Over on YouTube, there is a new channel called Shelly Morrison, but it’s brand new, has three subscribers, and no content. That might not even be her account. However, when we find out we’ll let you know straight away. Meanwhile, Caelan’s account’s been up for nearly two weeks and only has the one video. Hopefully, the Unexpected mom ends up being more productive. You can watch his Q&A there in the video below:

While we wait for Shelly’s new YouTube, fans can go over and watch Caelan talk. In his first video, the Unexpected baby daddy’s rather sick and explains he won’t get to do too much as he’s really busy. Well, fans know he works hard providing for his little family. Fans reacted to his one and only video. One said, “I don’t know why you guys are moving back in together just for her to move out on you again or kick you out.” Another agreed, writing, “honestly lmao she is so unstable and leaves the second she gets angry or doesn’t get what she wants.”

What do you think about Shelly Morrison starting her own YouTube channel soon? Will you follow her? Sound off your thoughts in the comments below.