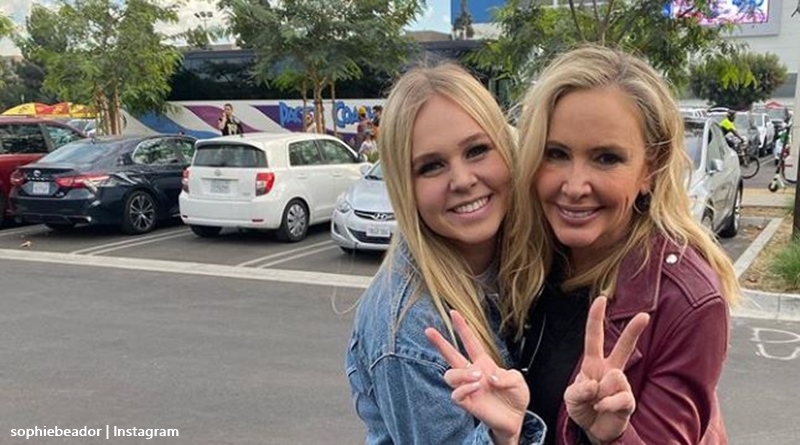 RHOC star Shannon Beador took to her Instagram to proudly announce that her daughter Sophie’s been accepted for Baylor University in Waco, Texas. It’s another high point for Shannon Beador, who we reported is madly in love with her new man John Janssen. But, some fans reacted a bit negatively to the news. Why would they do that? What’s wrong with the institution?

On her Instagram, Shannon proudly shared a photo of her daughter standing on the University campus next to the “Baylor” sign. She captioned it with, “So proud of my little girl who was accepted to @bayloruniversity!💛💚 I can’t wait to watch you make your dreams come true .” One of the hashtags she used included, #IllBeVisiting. Some fans wondered why she would go to a university so far from Shannon, but she never answered them.

On Sophie’s Instagram, she shared a picture of herself with a green balloon. She sounds really excited as well, writing, “I couldn’t be more excited to be attending @bayloruniversity next fall!! thank you Jesus for this insane blessing!!” Most people sent in their congratulations. One Bravo fan said, “So proud of you Sophie! 💚💛 Way to go! 🙏🏻” Another said, “Congrats! Great school!! My brother got his PhD in biochemistry there.” But other fans, mainly on the RHOC mom’s IG, responded negatively.

I couldn’t be more excited to be attending @bayloruniversity next fall!! thank you Jesus for this insane blessing!! #BU24 #sicem 🐻💚💛

While many congrats poured in, some fans of Real Housewives of Orange County reacted negatively to the news. One follower said, “There have been YEARS of scandals at that school. I grew up in Waco, I’m well aware of the school’s highs & lows, more so lately, it’s been lows. Sorry. Facts are facts.” Another noted, “Congrats! And tell her to be careful. There have been lots of scary stories about Baylor in the past.” One fan got hit on for saying negative things, but another fan defended them, as she only told the truth, they felt.

Other RHOC fans agreed that Baylor’s got issues, but they also noted many other colleges went through problems as well. However, one fan noted something about Waco. They commented to Shannon Beador, “Congrats. Waco is not the best city tho. Make sure she stays safe!!! Give that girl some pepper spray!” But, other people raved about it. One happy person noted, “Baylor is an amazing school! My son goes there and is also on the track team. Congrats moma!!! She will love it. You will too.”

So proud of my little girl who was accepted to @bayloruniversity !💛💚 I can’t wait to watch you make your dreams come true @sophiebeador ! ❤️ #illbevisiting #often😉

The Chronicle of Higher Education reported on the scandals at Baylor University. They noted that “Richard Willis, a former chair of Baylor’s Board of Regents” made offensive comments about African Americans in 2014. Not only did he allegedly use the “N-word” but he was exceptionally demeaning towards the females at the university. What he said got used in the lawsuits by some female students. The outlet adds “10 women say the university mishandled their sexual-assault complaints.”

They also noted that Fort Worth Star-Telegram reported that the “NCAA had concluded its investigation into the scandal and sent a letter containing a notice of potential wrongdoing to Baylor.” But other allegations of a similar nature emerged over the years since 2014. In fact, in 2018, they were still being investigated.  So, that’s possibly why RHOC fans warn Shannon Beador about the University.

What do you think about Shannon Beador’s daughter Sophie going to Baylor University? Are you excited for her? Do you think that one University’s as likely as any other to experience scandals? Sound off your thoughts in the comments below.