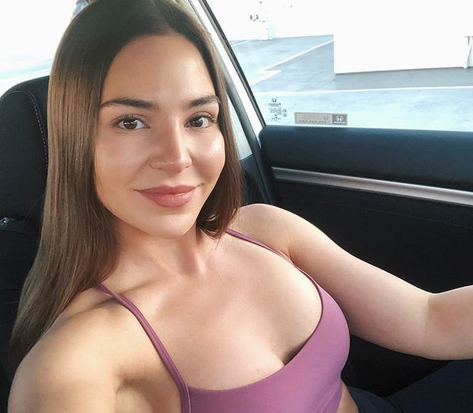 90 Day Fiance fans have been impressed with Anfisa Nava’s transformation. She’s been focusing on bettering herself and her life ever since her husband Jorge Nava has been in prison. He’s currently serving 14 months in prison for illegally selling marijuana. Fans have been wondering if Anfisa will ever mention Jorge on social media.

There’s also speculation as to whether the couple is still together. During Anfisa’s Q&A chats, she hasn’t mentioned Jorge. That hasn’t stopped 90 Day Fiance fans from bringing him up every second of the time. Now it looks like Anfisa is sick of the questions. She’s tired of fans asking her about Jorge all the time. She wants to focus on herself and her happiness rather than her husband.

Anfisa made it clear when a curious fan asked her about the status of her relationship with Jorge. She said that she’s simply not interested in answering that question. In fact, she’s more interested in talking about herself. Some 90 Day Fiance fans have been impressed with Jorge’s own body transformation. But that’s not on Anfisa’s mind. In classic Anfisa style, she’s talking about herself.

The reality star revealed the reason why she’s been keeping a low profile on social media is that she’s been busy studying in school. Anfisa is getting ready for the spring semester since it’ll be her last time at community college. From there, she plans on transferring her credits into a university. Anfisa is obviously proud of her where she’s at and excited about where the future is going to take her.

She never imagined herself having the opportunity to study in the United States. She can thank Jorge for that. When Anfisa originally enrolled in community college a year ago, she thought she was going to wait two years to transfer. Now time is flying by quickly and she’s nervous about entering university. But Anfisa has been enjoying taking classes on business administration and accounting.

Are Jorge and Anfisa still together?

Anfisa is also interested in continuing with her bodybuilding journey. But 90 Day Fiance fans want to know more about Jorge. Anfisa hasn’t even addressed Jorge’s own body transformation from behind bars. She hasn’t even complimented him. So fans outright asked her about the status of their relationship.

Anfisa has only said that she will address their marriage “someday in the future, maybe not.” She’s clearly not ready to talk about what’s been going on with them. She just wishes their fans would respect their privacy at this moment.

As previously reported via TV Shows Ace, Anfisa is looking to for a “fresh start” in her life. It’s not clear whether that will be with or without Jorge. If the couple does divorce, then fans will accuse her of only marrying Jorge for a Green Card and exiting the marriage as soon as trouble happened. But if she stays with him, then fans will accuse her of being a gold-digger and staying with him for the money and fame.

What are your thoughts? Do you think Anfisa and Jorge are still together? Do you think they’ll stay married? Sound off below in the comments section.

And don’t forget to follow TV Shows Ace for more news and updates on Jorge and Anfisa Nava.