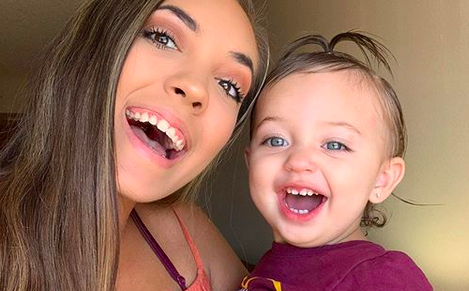 Fans of TLC’s Unexpected will recognize Chloe Mendoza’s name. The teen mom is raising her daughter Ava, who is one year old. Max Schenzel is Ava’s dad. Fans will recall that there was a lot of drama between Max and Chloe. Max was dealing with drug issues, and Chloe’s mother didn’t like Max.

Because of all of this, Max and Chloe’s relationship has been off and on. In Chloe’s most recent Instagram post, Max is seen in the background. This doesn’t mean they’re still living together, but it could be a sign. Of course, he could just be visiting.

Though fans have been worried about Chloe and Max for a while, their attention has recently been redirected elsewhere.

Fans speculate about a possible pregnancy

This is what Unexpected fans have said so far:

Here’s a screenshot from the video, which Unexpected fans are referring to when they bring up the rumors.

From the picture, it looks like Chloe could be pregnant. Some fans argue that she might have just eaten a large meal. Other fans think that it’s leftover baby weight from Ava.

In the comments section of a recent Instagram post, a fan commented, saying, “word on the street is your pregnant…. any truth to it??” In response, Chloe said, “zero truth”. One fan did mention that the rumors came from Chloe’s makeup video.

There’s always the possibility that Chloe is keeping the pregnancy a secret for now. Many women choose to wait to announce their pregnancies until they are further along. But, if Chloe is pregnant and already showing, she likely won’t be keeping it a secret much longer. 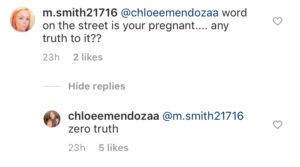 In a YouTube video, she talked about the show and said she is not going to return. She said, “I am 99.9% sure that I am not doing another season.” Fans were excited about Chloe’s return to Season 3 of the show and will miss her in Season 4.

It sounds like she is making the best choice for herself and Ava though. The show seemed to cause some issues for her. Eventually, she was just done with the whole thing. Still, she is encouraging other pregnant teens to join the show.

What do you think? Does it look like Chloe is pregnant, or do you think it’s nothing? Leave a comment below.