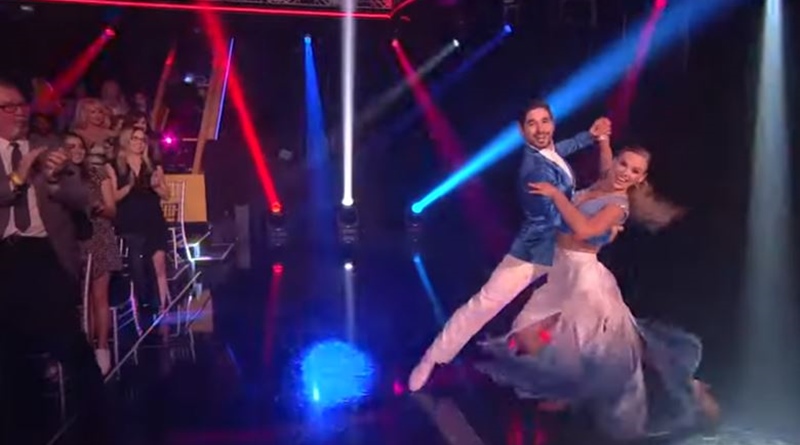 DWTS fans who love Hannah B saw her dance an incredible number with her dance partner, Alan Bersten. They got their first 10s and dopped just one point shy of a perfect score. TV Shows Ace reported that prior to this week, they also scored their first 9s. And, it seems this time, the 9 was more aimed at Alan that Hannah. The couple danced the Quickstep to Elle King’s American Girl.

DWTS fans took to YouTube and to Alan Bersten’s Instagram after the show. Overall, they were thrilled for Hannah B as they scored their first 10s. Len gave them a nine, but as one fan noted on Alan’s IG, “Len gave them a 9 for losing body contact.” And, yes, it seems Alan really took care not to touch her with his groin area.  That’s probably fortunate, as they looked very into the dance and each other. In fact, it got yet more fans clamoring for the couple to just “date already.”

Meanwhile, on Dancing With The Stars YouTube channel fans loved the music and the tempo of the dance. One follower said, “Finally, a good song choice! She is so good and she will definitely make it into the finals. Although she needs to maybe brush up on accuracy everything else is FLAWLESS. She is amazinggg Scores: 10 9 10”. Another agreed, saying, “I really hope she makes it into the finals and even wins. She and Alan were such troopers for taking on all the horrid song choices they have been given. There are formidable competition this season, but none of them had to power through all the mostly bad music Hannah and Allan were able to (sic).”

WHATTTTT!!! Let’s gooooooo @hannahbrown you absolutely crushed it!!!! I’m so proud! Did you guys like it?!?

Once again, the eliminations were just plain confusing

ET reported on the eliminations this week, and once again, they are puzzling and almost incomprehensible.  Once, again they noted about Sean Spicer: “Sean — the lowest [DWTS] scorer of the night and season — moves on to dance another week.” Actually, week after week this happens, so everyone’s getting confused. Even the judges can’t figure it. The outlet wrote, “It’s confusing for me that these are the two couples in the bottom two,” Carrie Ann says. ‘Confusing and irritating.'”

In the end, it was Kate and Pasha who got eliminated from DWTS. This was despite Len saying to them, “You two are an absolute joy for me to watch, and that was such a joyful performance.” The outlet notes the scores at the end of this week stand at:

What do you think about Hannah B and her dance partner Alan Bersten scoring 10s? After all, they only dropped one point off a perfect score? Are you surprised to see Sean Spicer still survives somehow? Sound off your thoughts in the comments below.

Remember to check back with TV Shows Ace often for more news about ABC’s DWTS.

‘Manifest’ Season 1 & 2 Drop Into The Netflix Library
‘OutDaughtered’ Adam Busby Shares His Secret Ticket To The Gun Show
OMG!!! Has Meri Brown DUMPED Kody For A New Lover?! [See Photo]
Is That Ava Or Olivia Busby’s Squishy Face? Fans Still Have No Idea
Zach & Whitney Bates’ Baby Heads To The NICU – Is He Okay?