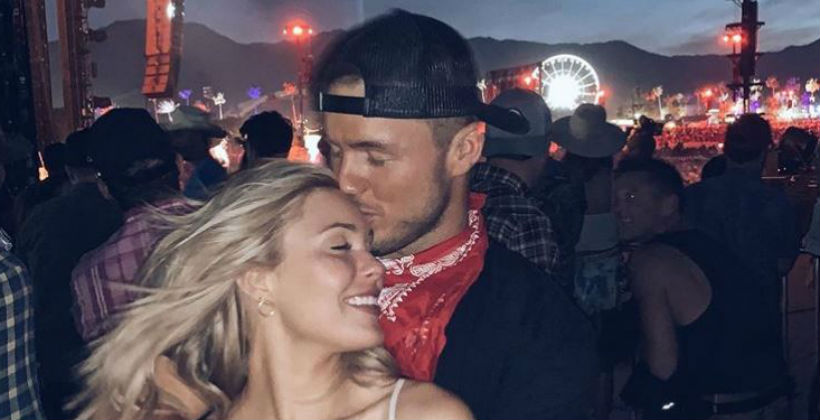 Former Bachelor Colton Underwood and Cassie Randolph met during his time as the lead on the show. Fans will remember Cassie getting cold feet and quitting the show. This led to Colton’s famous fence jump. Of course fans also know the two got back together. While Colton did not propose to Cassie on The Bachelor finale, the two are now finally talking about getting married one of these days.

While they are not quite ready to get married, they are discussing it. US Weekly shared that back in April Colton said, “We both feel like … living our separate lives but still coming together at the end of the day is what’s most important for us and what’s the right step for where we’re at in our relationship.”

Since then Cassie has moved to Los Angeles to be closer to Colton. While they are discussing marriage more seriously they are still taking it one day at a time. A wedding and kids will come in the future.

Basically she was a really good looking and smoke show of a Daphne and I look like a messy drunk Fred.

One can only imagine living out your relationship in the public eye is really hard. Colton and Cassie spoke with US Weekly this week about the struggles they have faced being in the spotlight.

Cassie said, “It was a lot of changes, for sure, because we went from these more simple, more normal lives and then all of a sudden, we film a show and then you’re thrown into craziness where everyone is very hyperaware of everything that goes on in your life and your relationship.” She continued, “It was a little bit of a struggle at first, I think — like adjusting to everything. But I feel like now we’ve kind of gotten used to it and learned to balance everything a lot more.”

Colton thinks the hard times have only made them stronger. He said, “I think you learn to communicate too. Just with whether it’s tabloids or someone speculating a certain thing or people reading into your body language, you know. You just learn how to communicate with each other and you’ll be on the same page with everything going on.”

Colton and Cassie starred in a country music video

The couple has recently been featured in Adam Doleac’s music video for “Famous.” It actually premiered this week. The opportunity came for them after they posted a clip of them singing the hit song on social media.

Colton said, “It sort of resonated with us and what we were going through at the time — of just coming off of the show, of the whole fame thing and whatever that is and nobody’s really meant to be famous. And we sort of took it one way. Obviously, now after hearing Adam describe the song, he wrote it for a completely other purpose, but that’s how it resonated with us.”

Doleac also wanted Colton and Cassie to be in the video. He said, “I said, ‘What would be really cool is to have somebody famous in it, with it being called ‘Famous.’” He continued saying, “My first choice was Colton and Cassie ‘cause I remember, you know, as an independent artist, it’s special when people with bigger followings like this post your song because that just lets more people who would have never heard the song hear it. I appreciate it very much. So I was wanting to get back to that and just see if they wanted to do it, and luckily they did. They’re the only people I asked and it worked out just how we wanted it.”

Cassie and I often think about how we would have met each other outside of the bachelor, would I buy her a drink? Would I bump into her on the beach? Would she play hard to get? (Of course) — in this video that drops today it tells a story that we love so much, it’s about not doing the predictable thing, it’s about taking a chance and being bold. I love you @cassierandolph & want to thank @adamdoleac for trusting us for representing this song. TODAY AT 10am PST

Colton took to Instagram to make a sweet post to Cassie and to thank Doleac for allowing them to represent his song. Colton said, “Cassie and I often think about how we would have met each other outside of the bachelor, would I buy her a drink? Would I bump into her on the beach? Would she play hard to get?.” Colton goes on to say the video tells a story they love. It talks about not doing the predictable thing.  Colton wrapped up the post saying, “I love you @cassierandolph & want to thank @adamdoleac for trusting us for representing this song. TODAY AT 10am PST.”

So while things are great between Colton and Cassie, they are not quite ready to tie the knot. They are, however, on the right track. Peter Weber’s season of The Bachelor is currently filming. Will he find love? Find out in January on ABC.

‘Extreme Sisters’ Season 2: Renewed Or Canceled?
Josie & Kelton Balka Bond With Daughter Willow While Baby Is In NICU
MTV’s ‘Families of the Mafia’ Returns, Sammy “The Bull” Gravano Featured, Preview
Todd Chrisley Talks About People Who Stab Him In The Back
WOW! Matt Roloff’s 2021 Net Worth Might Shock You