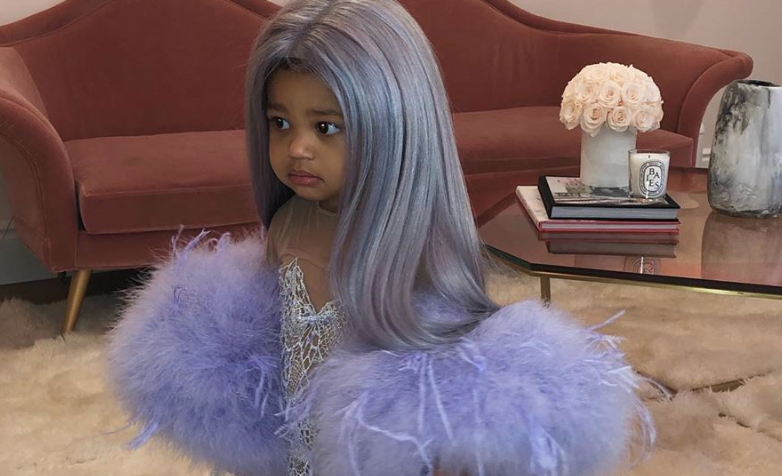 Stormi Webster looks SO cute this year for Halloween. She dressed up like her mom, Kylie Jenner, and the result is insanely adorable.

Stormi sported a long purple wig and a long purple dress that looks exactly like the one her mom wore just earlier this year. She even has the two big fluffy sleeves that Kylie wore on each of her arms. How Kylie got a toddler to put that outfit on, the world may never know. However, it totally paid off because the baby is too cute.

Too bad Kendall Jenner doesn’t have a baby that could wear the matching orange counterpart.

Clearly, Kylie is over the moon with this transformation of Stormi into her mini-me. Typically, Kylie seems to dress Stormi a lot like Travis Scott. It’s so adorable to see Stormi in an exact Kylie Jenner outfit. She even held a tiny silver purse. If she goes trick or treating like this, she’s probably going to have to pose for a lot of photos. If only Kylie would put her outfit back on and pose with baby Stormi.

Kylie even shared a video of Stormi in the dress and she honestly looks so happy. Does it get much cuter than that?

Fans are over the moon in love with the post too. In just ten minutes the post got over 900,000 likes and several comments as well. Sofia Richie even joined in on the comments with how much she loves the photos. “Omg I can’t deal 😍,” she wrote on the photo.

Several other people also commented similarly saying just how cute they thought Stormi was. Now, the other KarJenner babies just need to start dressing like their moms too. How cute would Chicago be in Kim’s Met dress?

What is Kylie this year?

So far Kylie has also stolen the Halloween show by going as Madonna while her friend went as Brittney Spears. The duo even re-created the iconic 2003 VMAs kiss that literally went down in history.

Let us know what you think of Stormi’s Halloween costume in the comments below. Do you like it or is it too much for a baby?

Also, be sure to watch new episodes of Keeping up with the Kardashians every Sunday night.