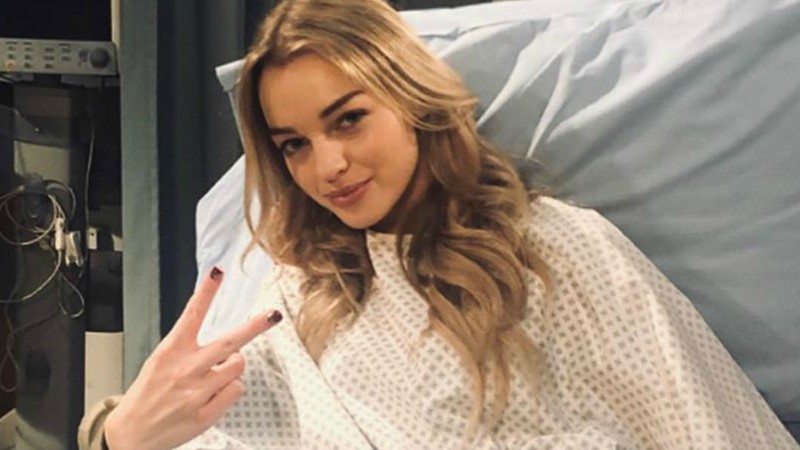 Spoilers say two couples get hitched before the one-year jump. Will Lani (Sal Stowers) and Eli (Lamon Archey) make it down the aisle? Or will Gabi (Camila Banus) get the revenge she craves?

Gabi’s revenge plan is tied to Julie’s (Susan Seaforth Hayes) heart. Literally. The bad girl rigs her cellphone to Julie’s pacemaker. She threatens Lani to leave Eli at the altar or else Julie dies.

In the promo video, it looks as though Gabi tests the device, leaving Julie’s family scrambling. Early in the week, Julie wakes up and thanks Gabi for donating Stefan’s (Brandon Barash) heart. However, that clearly doesn’t mean Gabi and Julie’s bad blood is cleared up.

Is Stefan’s widow willing to let Julie die if Lani won’t do what she demands?

As teased in the DOOL fall promo, a familiar face shows up in Salem.

Jordan breaks Claire (Olivia Rose Keegan) out of the nuthouse to help kill Ciara. With Ben keeping a close eye on Jordan, Claire has an open field to Ciara. Will she get caught before she can make her move?

Haley (Thia Megia) ran into a smoking ‘Hope’ who didn’t recognize her nephew’s girlfriend. Spoilers indicate that Haley blabs about the encounter to John (Drake Hogestyn) and Marlena (Diedre Hall.)

Around the same time, Rafe has a strange conversation with Hope about reuniting with John. How much longer until the residents of Salem realize Princess Gina is back?

Jennifer is in Danger on Days of Our Lives

Dr. Rolf (William Utay) still wants the flash drive Jennifer stole from him last week. He didn’t believe her denials about not stealing the drive. This week, she tries to access it to find out what the mad doctor is up to.

Internet rumors claim that Jennifer takes a fall and will end up in a coma after the show jumps ahead a year. Perhaps Dr. Rolf sics an unsuspecting Hope on her “Cuz.”

Days of Our Lives airs weekdays on NBC. The time jump is said to take place on Friday, November 8th.

Khloe Kardashian & Tristan Thompson Split: Are They Over For Good?
Lauren Burnham, Arie Luyendyk Jr. Reveal Twins Names
‘The Bold and the Beautiful’ Spoilers, June 21-25: Thomas Gets The Shock of His Life
‘Below Deck’ Daisy Has Drunk Regrets After ‘Sailing Yacht’ Reunion
Does ‘Seinfeld’ Have A Netflix Release Date Yet? When To Expect It