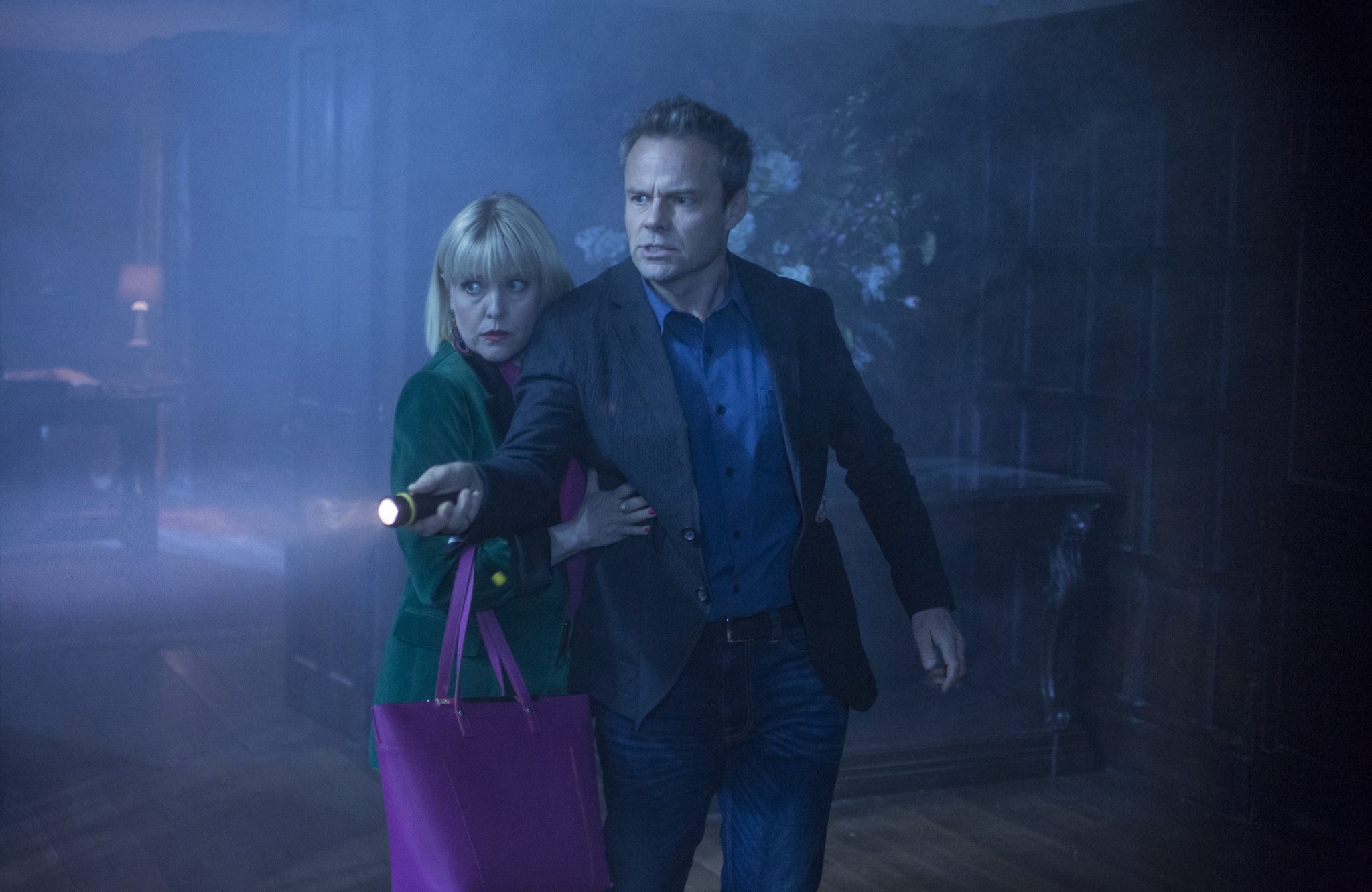 Recently, TV Shows Ace revealed that Acorn TV will drop Agatha Raisin & The Haunted House on October 28. This spooky episode will be released right before Halloween. How very Agatha! What is the first episode of Season 3 about?

The new episode starts out with Agatha Raisin (Ashley Jensen) driving a swanky new car from James Lacey (Jamie Glover). Turns out, this is a gift from James. No, the couple did not marry, but instead, are happily cohabitating. She wants to name it and James suggests calling the sultry vehicle, “Marilyn.” Agatha is pleased. Agatha wants to surprise James and takes him to a church. James looks a bit taken aback, when it is revealed that this is the home of her new detective agency. He carries her over the threshold and inside are their friends.

The converted church interior was designed by Roy Silver (Mathew Horne) and is very creative. James seems a bit uncomfortable, but he talks about expanding his comfort zone and affectionately looks at Agatha. Now, all Agatha needs are customers. James finds a haunted house called Ivy Hall. The owner is a miserable woman named Mrs. Witherspoon (Richenda Carey). Her home is haunted. There had been a murder there hundreds of years ago. Now, there are sounds inside and she can’t get the police interested in her case. But Witherspoon has no confidence and calls it desperate times and asks Agatha and James to stay the night.

It turns out that hundreds of years ago, there was a murder of Sir William at Ivy hall in Hebberton. There is a rumored treasure that people have been searching for since his death. But, Mrs Witherspoon doesn’t believe that this treasure even exists. There is more. It turns out, Mrs. Witherspoon has been spying on the neighbors and no one likes her. Everyone advises her to walk away.

Who Are The Suspects?

Agatha and James walk around the creepy house and the sounds come from everywhere. Roy and Sarah Bloxby (Lucy Liemann) help Agatha and James investigate. Eventually, they are scared off, but the next day, daughter Carol (Claire Cox) finds her mother dead. Now Agatha has a murder to solve!

They begin to compile a list of suspects of who could be causing the spooky sounds. This includes video game designer Percy Fleming (David Newman) who wants to buy Ivy Hall, There is her son, Harry Witherspoon (James Dreyfus) who insists his mom was selling because she needed the money. In addition, history buff and television show star, Florian Devere (Mark Aiken), is another suspect. History groupie James fawns all over him! There is a reenactment group called The Crossed Swords that may lead to some big clues and plenty of red herrings. But, we know Agatha will figure it all out.

The new episode is delightful and spooky. Gone is the love triangle between Agatha, James and Charles (Jason Merrells). Also gone is Katy Wix, who played housekeeper and pal, Gemma Simpson. But, Toni Gilmour (Jodie Tyack) is now Agatha’s new housekeeper and assistant. Her unique talents and humor will add a lot to Agatha’s detective agency. She is a solid new character to this delightful mystery.

Agatha Raisin fans, did the new preview get you excited for the new season? Share your comments and be sure to check back with TV Shows Ace for the latest mystery news. Acorn TV will drop Agatha Raisin & the Haunted House on October 28.

Adam Busby’s Birthday Wish Granted: Finally Gets His Hummer
Critics Say Khloe Kardashian Looks Like An ‘Alien’ In Nurtec Commercial
‘Sister Wives’: Are Kody & Robyn Brown About To Be Homeless?!
‘Siesta Key’ Season 4, Episode 5 Not On This Week & Here’s Why
TLC’s New ‘Filth Fighter’ May Give ‘Hoarders’ A Run For Their Money