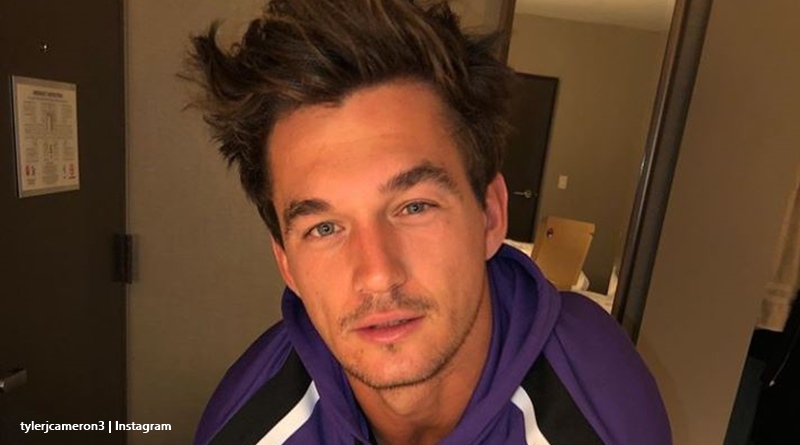 DWTS sees Hannah B accumulating a lot of fans who hope for the win. And, one of those, Tyler C, nearly made it all the way on her Bachelorette season. In fact, Tyler Cameron said after she sent him home that he wouldn’t mind being on the Dancing With the Stars show. Not invited, he watches and votes like everyone else. And, he’s Team Hannah for the Mirrorball Trophy.

DWTS star Hannah B gets Tyler C’s thoughts and support

Hannah B and Tyler met up for drinks after The Bachelorette, but it never came to anything. Shortly after, he took up with Gigi Hadid. But, Tyler thinks of Hannah.

TV Shows Ace reported that he remembered her birthday. We noted, “Hannah Brown got a text for her birthday from Tyler Cameron. He’d told the media he’d sent it before saying he wasn’t interested in dating anyone from Bachelor Nation. He said they were still friends and she was incredible. He said he wanted the best for her.”

Well, that’s rather nice but for Hannah, the chances of any new romance now seem very slim. So, maybe just being friends is best for the time being. Hannah B’s very busy focusing on her dancing and would love to clinch the DWTS Mirrorball Trophy. Her dance partner, Alan Bersten and Hannah seem to get along fine. But, she repeatedly told the media she’s not focusing on roses and love right now.

Tyler C’s Team Hannah for the Mirrorball trophy, and why not?

According to a report by US Weekly, “Cameron revealed he’s been keeping up with the dancing competition and has dialed in to vote for the former Miss Alabama and her professional partner Alan Bersten.” The outlet caught up with him at the “Seminole Hard Rock Hotel & Casino in Hollywood, Florida.”

Like her other fans, Tyler told them that he really wants “her to win.”

“She looks like she’s having a blast. It looks so much fun. She’s killing it.”

Well, Hannah B scored her first nines and that made her happy. But, she dropped to three eights in her next performance. Slow to talk about it on her Instagram, Hannah eventually came up and thanked her fans for their votes.

Now, she knows that Tyler C’s one of those DWTS fans she can rely on for those. The Samba in week 6 really worked for Hannah even though some fans suggested the music was all wrong. Not everyone may know that she hurt her foot during rehearsal.

On her Bustle blog, she noted, “I stepped on my own foot with my heel and I bruised the crap out of my foot. It’s all swollen and it really hurts!”

Tyler C and Hannah B’s other fans all wait for the Halloween dance. On his Instagram, Alan Bersten shared about it.

In the photo, Hannah’s dressed up as a spooky person. Meanwhile, Alan looks a bit goofy. One fan said, “Hurry up Monday night. Hanna is still a beauty even with that spooky makeup and you look like a Genius/Scholar with that eyeglasses.”

What do you think about Tyler C being Team Hannah for the Mirrorball trophy? Could this lead to more than just being friends? Whatever happens, Hannah’s not likely to make any moves with men at the moment as she just wants to win right now. Sound off your thoughts in the comments below.