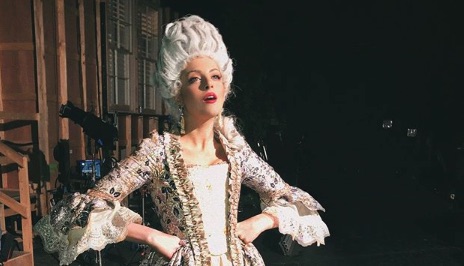 As TV Shows Ace has previously reported, Dynasty will air a musical episode. This is an episode that will include a Halloween costume party! Fans are sure to expect all sorts of tricks or treats revealed with a room full of people hidden behind masks. The Carringtons are in a difficult position. But, this doesn’t mean there won’t be time for a song and dance.

“Let them eat cake!” Fallon Carrington (Elizabeth Gillies) is all dressed up as Marie Antoinette for a luxurious Halloween costume party. The episode is called “Wild Ghost Chase.” That sounds menacing. But, hopefully Fallon will not lose her head, as she stops to sing songs as she deals with her brother Adam and her father. She may even sing a love song to her soulmate Liam (Adam Huber). Will he duet with her?  Could Gillies belt out a metal song, as she tries to regain her former business Femperial, which was stolen by Kirby (Maddison Brown)?

This is the third episode of Dynasty Season 3. Directing this episode is Kenny Leon. This is his fourth Dynasty directing gig and he loves working with this cast. Kenny Leon has won numerous awards on Broadway and on screen. He also has some experience directing musicals. This includes The Wiz Live! released in 2015. That episode starred a talented cast, including Shanice Williams, Common, Queen Latifah and Mary J. Blige. In 2016, Kenny Leon directed Hairspray Live!, with Harvey Fierstein, Kristin Chenoweth, Ariana Grande and Jennifer Hudson.

Mrs. Daniels Is Back On Dynasty!

According to IMDb, Sam (Rafael de la Fuente) gets an unexpected guest. TV Shows Ace has already reported that Mrs. Daniels (Kelly Rutherford) is back. What sort of tricks does she have for Steven’s (James Mackay) ex-husband? It sounds like a find at the hotel is going to get Sam into big trouble. Will Mrs. Daniels keep Sam from creating his own dynasty?

Dynasty fans, are you ready for the musical episode? Do you think that maybe the new Alexis Carrington could pop up at the Halloween costume party? Be sure to check back with TV Shows Ace for the latest on Dynasty. Catch Dynasty Season 3 on Fridays on The CW and on The CW App.