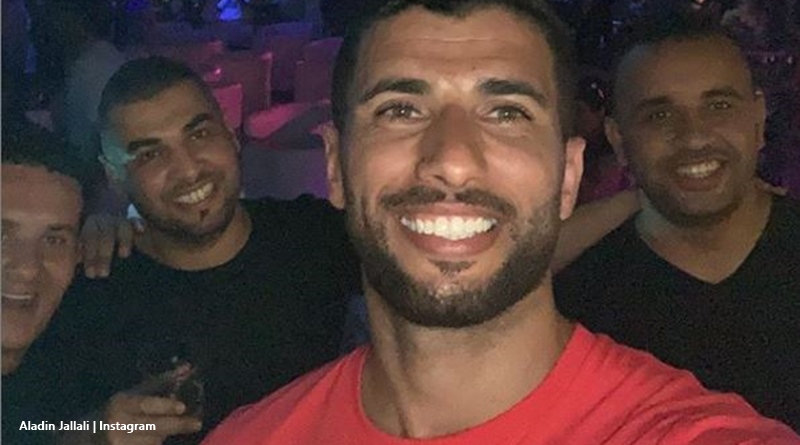 90 Day Fiance: The Other Way Tell All came and went. But Aladin Jallali felt he never got to say his side during the Tell All. So he gave his own one. It’s quite hard to follow as it got scattered through multiple posts but some IG fan sites collated it. Now, Aladin announced after his own Tell All, that he’s starting a new business. He reiterates there’s no chance of any-production reconciliation between him and Laura.

@krazyeyeskm2 on Instagram summarized the Tell All by Aladin. Basically, he said that Laura “catfished” him with younger pics of herself. But, he grew to like the person he met online. She allegedly told him she was only 40, not in her fifties. Also, when they went to get the “marriage license,” that’s when he discovered her age. Bear in mind, he tells viewers,  he really didn’t know she used hair extensions. A clerk discovered the age she claimed actually differed from her passport. When confronted, the 90 Day Fiance star said they made an error on her passport.

When pressed, her birth certificate showed the same age as her passport. But then she claimed the mistake “came from the birth certificate” and the passport merely carried over the wrong date. The 90 Day Fiance alum said that she eventually admitted her real age. But, Aladin went on with it as he felt he loved her and he “thought [he] could handle it.” Many fans believed his version. One said, “I believe him!!!! Laura’s retirement story didn’t make any sense!!! Plus we know she lied about Liam!!! I hated the way they treated Alladin on the tell all like Laura was the victim!!!” Plenty more videos can be found on Aladin’s Instagram if you want the full rundown.

👈🏽👈🏽 SCROLL Aladdin gives his side of the story. I believe him because we all see how Lying Laura has lied. He could have been messy from the start but he choice to let her dig her own grave. These are the main post but he commented in a few so if you want to go check them out here’s his IG @aladinjallali. @tlc_laura_jallali #lauraandaladin #aladinandlaura #90DayFiance #90DF #90DayFianceBeforeThe90Days #B4T90D #90DayFianceHappilyEverAfter #HEA #90DayFiancePillowTalk #PillowTalk #90DayFianceWhatNow #90DayFianceTheOtherWay #TOW #TheOtherWay

Aladin also explained about his new business. On his IG, he shared a post that said, “If there had ever been any hope for a reconciliation post-show, it is completely gone now…I am excited to announce that I…started my own business. The official launch and details…come in the next week or two.” On that post, some 90 Day Fiance fans discussed a bit more about their feelings. Here’s what a few of them said:

How do you feel about the version of events that Aladin gave out?

What do you think about Aladin’s version of the 90 Day Fiance Tell-All? Are you happy that he’s moved on and now looks at starting a new business? Or, like so many of Laura’s fans do you think he’s the one telling fibs? Sound off your thoughts in the comments below.

Casey Nezhoda Reveals Brandi Passante Isn’t The Only Sexy ‘Storage Wars’
Chase Chrisley Wants To Move To The Bahamas: Would Todd Allow It?
J. Lo Assassin Action-Thriller ‘The Mother’ on Netflix: What We Know So Far
‘Wentworth’ Season 9 Netflix Release Date: What To Expect, When
Teresa Giudice & Kyle Richards Post Selfie Teasing Peacock’s ‘RHUGT,’ So Why Is Teresa Is Getting All The Attention?