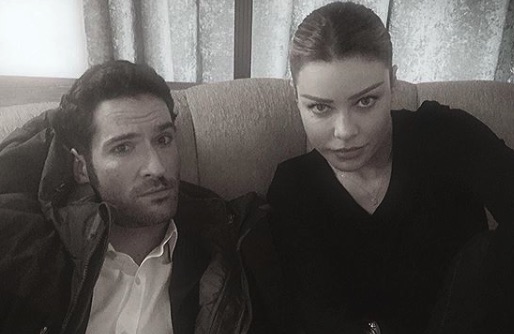 Lucifans who have hoped to see a Lucifer musical episode and needed their burning questions answered can get really excited now. On Thursday, it was revealed that they are now filming a very special Lucifer that will answer a lot of questions. What has Tom Ellis, Lauren German, Lesley-Ann Brandt and Aimee Garcia revealed?

Ok! Part 1 of our #Lucifer set visit is here. Make sure to watch the video at the top… there’s more in there than the article, including what Tom/Aimee say about the series ENDING. 😈🥺🙏🏻 @etnow https://t.co/6QqegYY2KD

Lucifans who thought they knew their beloved characters will be thrown into a new world. Lucifer Season 5 is going to include a musical episode.  According to ET, who interviewed several of the main stars of the show, the current episode will be shot all in black and white, and go back to the 1940s. The costumes will be different. All of the characters will be different. Most of all, questions will be answered. According to Tom Ellis, it sounds like “the” question is answered: “We tell a story that answers the question a lot of fans have been asking actually.” Yet, Tom didn’t reveal what that question could possibly be.

Ellis shared that we will see all the characters in “a different light.” But he explains that Lucifer is really the same person. “Timeless.” This time, the other characters are just going to relate to him differently. They are even talking differently. The points of view are different.

“There’s an element to Lucifer where he seems to be from the Oscar Wilde period. And to see the other characters fall back into that style is quite interesting.”

Lesley-Ann Brandt says that they are filming the fourth episode. If this is the case, then according to the Lucifer Writer’s Room Twitter account, the episode is entitled “It Never Ends Well For The Chicken.”

Lucifans have been asking for it and they will get it: A Lucifer and Maze duet. This will not be anything modern, but Lesley-Ann Brandt reveals that instead, it will be a 40s ballad. How they relate to each other will bring “a full-circle moment.”

“I do sing with Tom, which is something I know that the fans really wanted,” Brandt says. “It’s a beautiful, beautiful rendition of one of my favorite songs and a classic and has incredible American vocals, and we pay homage to that era and time.”

The New Zealand actress will also sing another 40s song on her own. Her version of “Wonderwall” was one of the Season 4 highlights. It sounds like this episode will have many more musical delights that Lucifans will love.

Lauren German has revealed that “None of us are playing our characters.” Before they began filming, she said she “really dreaded” this episode. But now, she admits that this has been “really fun.” Lauren reveals that the costumes, makeup and hair are especially exceptional. But, in this episode, Chloe is “pretty much nonexistent.”

The cast will be totally different in their walk and talk. For example, the actress will be portraying a character with an East Coast accent. She is quite secretive about her role. Could this episode possibly explain why Chloe is special to Lucifer? We don’t know now, as Lauren  just can’t reveal anymore information. This includes any information on whether she will also sing.

D.B. Woodside has shared that the costumes are “outrageous.” Subsequently, he does share that we will see “Amenadiel physically playing something that we have not seen on this show yet.” Could this mean we could see D.B. dance?

Aimee Garcia claims that Ella is going full “180” Fans who remember the Season 3 bonus episode “Once Upon A Time,” where we saw Ella as an edgy classic car repair shop owner. This was different from the optimistic Miss. Lopez, but recognizable. But, Aimee reveals that we will expect something even more different in this Season 5 episode. In fact, “unrecognizable.”

“Ella is here and when you see who I am in this episode… the one word I would use is unrecognizable.”

Lucifans, are you getting excited about the Lucifer Season 5? Are you looking forward to some 1940s-era musical numbers, costumes and sets? Be sure to check back with TV Shows Ace for the latest with Lucifer. Netflix will drop Lucifer Season 5 sometime in 2020.