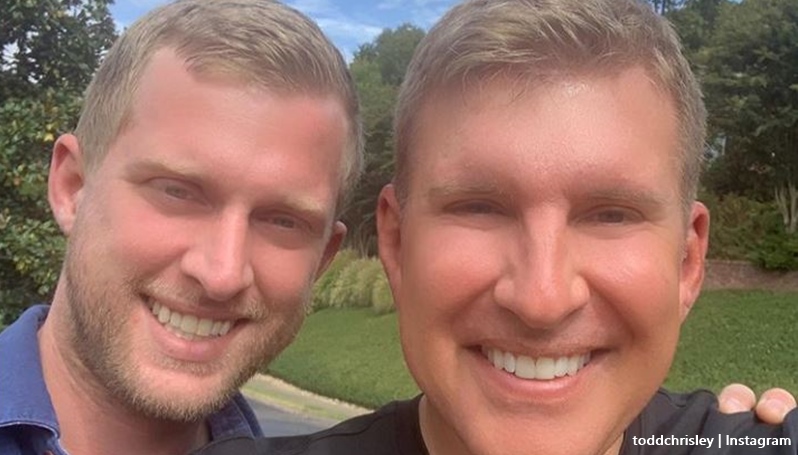 Todd Chrisley shared on his Instagram about a guys’ night out this weekend. He and his sons Kyle and Grayson were joined by Savannah’s fiance Nic Kerdiles. The three men and a boy looked radiantly happy together. Fans noticed how well Kyle looks these days. Actually, many of them love it that he and his dad reconciled, and after his suicide attempt in August. Kyle looks like a different man.

Todd Chrisley fans love the photo of him with Kyle, Grayson, and Nic Kerdiles

The photo that Todd shared with his fans came with the caption, “What happens in Nash Vegas stays in Nashville Vegas until social media gets it…guys night out and these three were the only options available, I am still blessed beyond measure, love you all.”

Well, a few months back, Kyle might never have even featured in such a nice picture. Much like his sister Lindsie, Kyle and Todd never spoke much and he disappeared off the Chrisley Knows Best show for ages.

Todd and Julie recently dealt, and still deal with, federal tax and business fraud issues. They make some headway in their favor, but Todd Chrisley mentioned how he got so angry as Kyle got drawn into it by the Georgia Tax department. But, Kyle told him what happened and what he was told, so it looks like they forgave each other. Also, Kyle got admitted to the hospital and later admitted it was a suicide attempt. Todd rushed to be by his side. So, many fans loved the photo of Kyle looking so well.

Lots of love goes out for Kyle

Fans of the family shared their thoughts on Kyle. One follower said, “Kyle looks great, heck all of you look awesome!!!”

Another noted,” Kyle looks really good!!!” Kyle looked well-kept with a nice looking beard. His nice eyes sparkled in the photo as he sported that Chrisley smile. Fans assume it must be a great comfort to Todd Chrisley with Kyle on the mend and back in the family fold. He’s been going through a difficult time with the various court cases and with his estranged daughter Lindsie.

As a Christian family with a large Christian following, many fans wish that Lindsie would bury the hatchet and forgive her family for their perceived wrongdoings. Todd always maintained he’s ready to forgive Lindsie and to just love her. But, she’s not buying into it.

In fact, she keeps on making some rather nasty allegations against her family, including her sister Savannah. TV Shows Ace reported that Lindsie “called out her sister Savannah on social media.” She said, “@savannahchrisley honey your fakery is up. Stop playing all sides like you’ve always done to get yourself ahead. You’re fake & you need help.”

What happens in Nash Vegas stays in Nashville Vegas until social media gets it … guys night out and these three were the only options available , i am still blessed beyond measure , love you all @graysonchrisley @kyle.chrisley @nickerdiles

On Todd Chrisley’s post, fans really hoped that Lindsie and Todd could also reconcile. One fan said, “I wish you and Lindsay could make amends.” But as another fan pointed out, Lindsie’s racking up the talk against the family, as evidenced by her recent interview with Dr.Phil. Still, Todd’s got his faith, and so have his fans who hope that their Lord will help to make things right in the long run. In the meantime, they celebrate the return of Kyle in Todd Chrisley’s circle of loved ones.

What did you think of the photo that Todd Chrisley shared of him out on a guys’ night out with Grayson, Kyle, and Nic Kerdiels? Sound out your thoughts in the comments below.

‘Renovation Island’ Resort: Why Was It Shut Down?
‘General Hospital’ Spoilers, June 21-25: Maxie and Brook Lynn’s Barrel Of Lies
‘Luca’ Post-Credits Scene Explained: What The Heck Happened?!
Robyn Brown Has An Alternate Personality — And She Named Her
‘Bering Sea Gold’ Exclusive: Shawn Is Dead in the Water