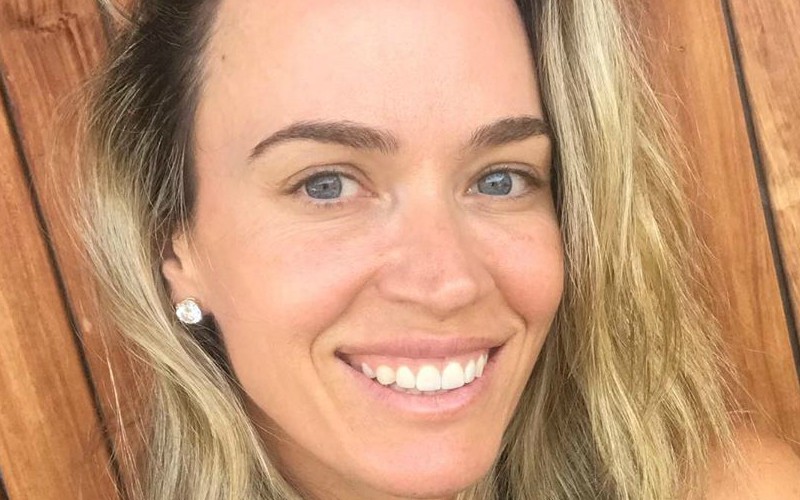 The Real Housewives of Beverly Hills star Teddi Mellencamp Arroyave is in full mommy mode these days. She announced in September that she was 14-weeks pregnant with her third child. She has been posting photos on her Instagram account of her growing baby bump.

When I first had Slate, I was driving myself crazy going to every “Mommy & Me” class I could find online! If you know me, you know I can barely stand driving down the street, but I was determined to meet other likeminded moms. Luckily, I was eventually able to find my “mom tribe.” And then when I got pregnant with Cruz, most of those mamas were expecting as well. But now, five years later, here I am pregnant again and on the lookout for some new expecting moms to share and bond with. And with a busier than ever schedule, I am so blessed to have discovered @peanut. It's an app to meet other women in your area who the same similar interests and are at a similar stage in life. You can arrange meetups, share experiences, ask questions and get answers from real women. I've been able to easily connect with new moms and moms-to-be nearby, as well as join in discussions without any judgment. Favorite maternity workout wear? How to stay fit? Weird pregnancy cravings? There are so many conversations happening on there! I seriously don’t know how we did it before @peanut! To all moms and moms-to-be out there, I recommend you sign up. I promise you, it’s worth it 💕 #peanutapp #ad

Now that she is almost halfway through her pregnancy, Teddi is opening up about her previous struggles with fertility. She has two other children, Slate, 7, and Cruz, 5.

RHOBH Star Opens Up About Failed IVF and Miscarriages

People magazine reports that Teddi shared personal details about her pregnancies in her Teddi Tea Pod podcast this week. The reality star wants others who face similar struggles to know they aren’t alone.

“We don’t talk about things until somebody else is going through them.”

Teddi shared with her listeners that she conceived Slate via intrauterine insemination. Before she became pregnant with her son, Cruz, she suffered multiple miscarriages due to failed rounds of IVF.

The accountability coach also discussed being on bed rest for most of her first two pregnancies. The birth of Cruz was particularly difficult. He suffered medical complications at the beginning of his life, though he is doing fine now.

During the intimate podcast, Teddi gave new details about her pregnancy. She and her husband, Edwin Arroyave, had all but given up on having more children.

Teddi told fans previously that she would love more children. However, the IVF process had been rough for her and her family. She didn’t think another child was in the cards for her.

“I had no idea. I didn’t even know I was pregnant until I was nine weeks pregnant.”

RHOBH Star is Having a Girl; Asks Fans for Name Suggestions

It’s a girl! Of course, we would have been equally excited either way, as @tedwinator, the kids and I are just blessed to have a healthy baby no matter the gender. Although I did promise Cruz he could help name her so not sure she’ll be too thrilled being called ”Catboy” Arroyave. 😜 Thank you to @ocballoonbar for the pop we needed, @204events for the rad background and @jorgebphoto for capturing this moment so perfectly. 💕

A few days ago, Teddi posted another video. This time, alongside her husband, the reality star asks her fans to offer ideas for names.

“We cannot come to a decision on the name for our new baby girl. We want it to be one or two syllables, unique, and a good fit with the rest of the kiddos.”

Her two children lost naming privileges after suggesting “Pugsley” as a name.

I am almost halfway through my pregnancy and @tedwinator and I need your help! We cannot come to a decision on the name for our new baby girl. We want it to be one or two syllables, unique, and a good fit with the rest of the kiddos (whom we are no longer taking suggestions from after their last idea of calling her “Pugsley”). Comment any suggestions below– who knows, you may name the newest addition to our family!

Some fan suggestions include Jai, Belen, Sterling, Natalia. Several fans even cast a vote for the name “Pugsley.”

Season 10 of The Real Housewives of Beverly Hills will return to Bravo in 2020.