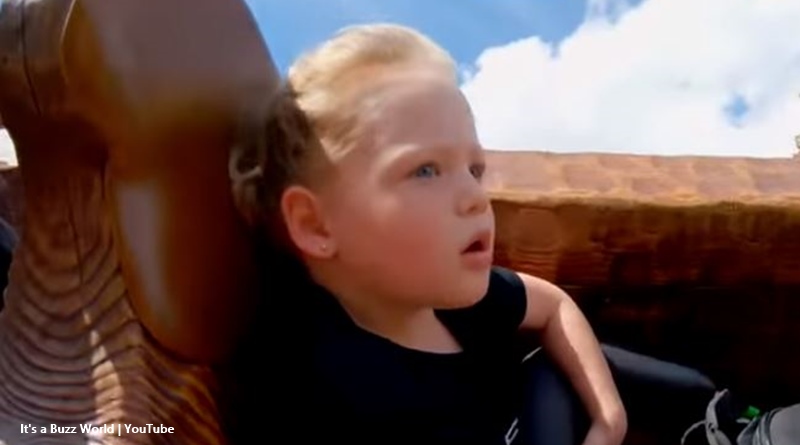 TV Shows Ace reported that the Busby’s took her to see an occupational therapist. Obviously, getting a reaction from her’s not that common. In fact, a good reaction from Parker’s the main title of a new video by It’s a Buzz World on YouTube.

This week, the subject of Parker and her anxiety and withdrawal came up on social media.  At the time, we wrote that in an Instagram photo, some fans “noticed that Parker looked very sad.” Additionally, we wrote, “One of the fans noted, “Parker is different than her sisters. Hope she is still getting counseling. No child should have that expression.” Well, we wondered if the Busby’s still had some concerns. It seems that possibly Parker’s ongoing troubles are very much uppermost in the OutDaughtered parents’ minds.

Adam Busby shared a new video of all the kids enjoying a visit to Disneyland. Efficiently, the adults got all the kids through the gates and into the strollers. Actually, Adam Busby’s getting really good at making videos these days. Somehow he managed to get the right music to describe each scene. Plus, he grabbed so many reactions and expressions from all the kids. From the wonderful fireworks to the Castle show, and across the various rides, he took us with them on a journey of family fun.

Parker and the Roller coaster rides

After gently easing the kids in with magic carpet ride, the family made their way to more daring rides. Adam noted specifically, that he knew Parker would “need him” with her. And, he made sure to stick close to her. The first ride took them up and down, through tunnels and scary dark bits, then out into the light again. Screams of fearful happiness and amazement came from all around. In the dark tunnels, we heard Adam talking, obviously reassuring Parker that soon they would arrive in the light.

Throughout the ride, Parker looked distant, neither terrified or exuberant. Despite filming most of the time, Adam held his hand on Parker so she knew he was there. When he asked her if she liked the ride, she said, “no.” She didn’t like it all.

The next ride looked even scarier. It’s the one that starts with a very long pull up, then a hesitant moment at the top, and down you go, through the switchbacks and scary tight corners. Going down the first plunge, Adam lifted Parker’s arm and told her to put her hands in the air. But, there was no chance the OutDaughtered quint was going to do that.

Once again, when the camera panned to Parker, her almost expressionless face showed a girl looking far away and uninvolved. But, a small quiver touched her lips now and then. At the end of it, Adam asked Parker, “did you enjoy that?” Almost smiling, shy Parker nodded and said, “yes.” She enjoyed the ride a lot. Adam was so thrilled that he got a nice, positive reaction, that he wrote about it on YouTube. The OutDaughtered dad said, ” took Parker on the Rollercoasters! I knew that she should need to be with me. It was great to see her reaction though!”

You can see the video below.

What did you think about Parker enjoying the roller coaster? Sound off your thoughts in the comments below.

Remember to check back with TV Shows Ace often for more news about Adam Busby, Danielle, Blayke and the quints from OutDaughtered.