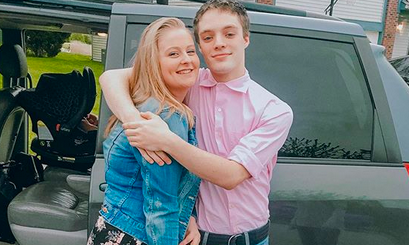 Unexpected star Laura Barron has become a mom for the second time! Early in the morning on Thursday, she gave birth to her new son. She and her husband, Tylor Strawmyer, named him Leo Brian Strawmyer. The new addition weighed 7 pounds and measured 19 inches at birth.

On Instagram, Laura shared a few Instagram stories and a post about her new son. In a story, she said, “He’s perfect and healthy. Thanks for all the kind messages. We really appreciate you guys praying and all your love for our family.” She posted a couple of pictures on her Instagram account, where she announced his name. One picture features the proud mom with her new son. The second picture includes Tylor too.

Leo Brian Strawmyer We love you so much

Then, the Unexpected star added that she was, “Taking some time off of my phone and spending time with him now.”

As Unexpected viewers may know, Laura and Tylor already have one son together. Laura’s pregnancy with Lucas was featured on Season 2 of the show. Now, the little one will be two years old in February.

In July 2018, Tylor and Laura decided to get married privately. Recently, they celebrated their one-year wedding anniversary. After they got married, they went on a honeymoon. This included a cruise to Mexico, Honduras, and Belize. Then, Tylor went to Navy boot camp in the Chicago area.

He ended up completing boot camp in November before going to A school. He graduated A school too. In April of this year, Laura announced that she was pregnant. Things have been busy for the couple for the past year.

The second season of the show includes Tylor and Laura preparing for parenthood the first time around. Now, of course, their first son, Lucas, is a year-and-a-half old.

As it turns out, the two have made it work. Unexpected fans have noticed that the two seem to be doing well. On social media, Laura keeps fans up-to-date with pictures of herself, Tylor, and Lucas. Now, she will continue posting pictures that feature baby Leo too.

Fans seem to be impressed that these two were able to make things work. Not all of the couples on the show can look past their differences. A lot of them seem to be breaking up as a result of their potentially stressful situations. Plus, there is plenty of other drama going on. Somehow, Laura and Tylor made it work.

What do you think of Laura and Tylor’s life together right now? Were you wondering how the former Unexpected stars were doing? Leave a comment below!