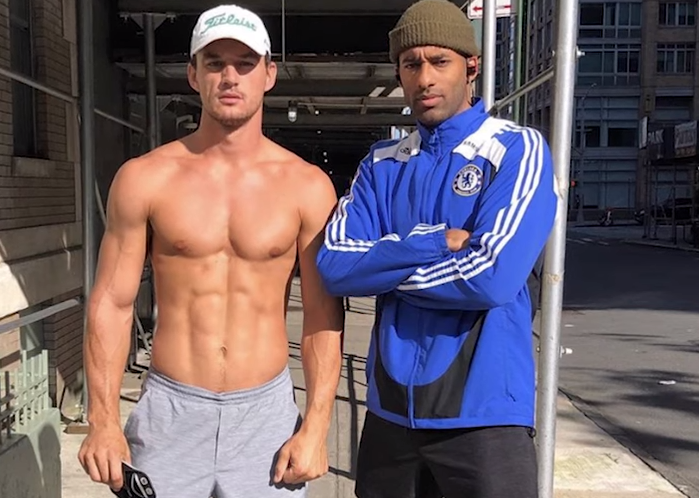 Tyler Cameron, along with many fans wasn’t too pleased with Kanye West’s comments on Kim Kardashian’s Met Gala look.

Cameron, the Bachelorette heartthrob, retweeted a clip from Sunday’s episode of Keeping Up With The Kardashians. Kanye had made comments to Kim about her outfit for the Met Gala. He said the skin-tight Thierry Mugler dress and corset she was planning to wear at the event the net day was “too sexy.”

“You are my wife and it affects me when pictures are too sexy,” Kanye told Kim in the video.

She quickly shot back at Kanye, before he stormed out of the room. “You built me up to be this sexy person and confidence and all this, and just because you’re on a journey and transformation doesn’t mean I’m in the same spot with you.”

Cameron seems to have the confidence to put the infamous Kanye in his place.

Many fans were on the side of Kim and Cameron with this one, along with another Bachelor nation star, Dylan Barbour. “What about when your fiancée makes you stop posting shirtless pics?” The Bachelor in Paradise star replied, referring to Hannah Godwin, whom he met on the show.

Are Tyler Cameron And Gigi Hadid Still A Thing?

Cameron has recently been linked to supermodel Gigi Hadid. They had been spotted around NYC a few times before attending an MTV Music Video Awards afterparty together in August.

It seemed the couple status had been solidified when Cameron attended the funeral of Hadid’s grandmother. Ans van den Herik passed from complications due to cancer.

According to People, Cameron said he was attempting to keep the relationship private.

“We’re just friends,” Cameron replied when he was asking about his standing with Hadid. “I mean, that’s just where we’re at. Our relationship doesn’t need to be public. She’s good people, she’s an amazing person, and we’re just keeping it friendly.”

The two haven’t been seen in a photograph together since the funeral. During an episode of Watch What Happens Live back in early October, Cameron hinted that the romance may have taken its course. It seemed he had told Jenny McCarthy with a flirtatious smile, “I may be single.”

Just two days after, he told People his private life is private. “I mean, I’m at a point right now where I don’t really talk about what I’m doing relationship-wise. what’s out there is out there. I’m just focusing on myself right now,” Cameron said.

Tyler Cameron is currently focused on fitness. He recently completed the Chicago Marathon and is getting ready for the New York City Marathon in November.