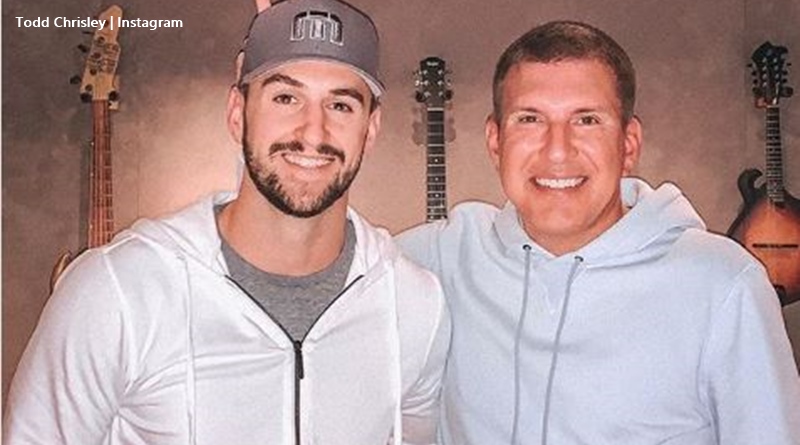 Todd Chrisley went onto his Chrisley Confessions podcast without his wife Julie. He shared it on his Instagram. There, he promised, “Todd talks about what is going on.” Plus, “what to expect in the Chrisley’s courtroom life going forward.”

Well, he did talk. And, a lot more than when Julie joins him. So, what did he say about the lawsuit filed against Joshua Waites?

Todd Chrisley reminds us he tells the truth on his podcast

He went on to talk first about a lawsuit that was filed yesterday. (The lawsuit filed against Joshua Waites, of the Georgia Department of Revenue’s Office of Special Investigations,” People reminds us). Todd said, “the investigation started back in 2017. “Baffled” describes how he felt.  He talks about their checks into the allegations that showed “zero” money outstanding.

But, Todd Chrisley notes that by March that year, Joshua Waites pitched up. He knocked on the front door and gave them a subpoena. The allegations said they “owed hundreds of thousands of dollars.” In the time it took Todd to get his legal team, and they did their investigations, the allegations rose. They went to “like a million four,” Todd noted. Actually, it went even higher, but they suggested the Chrisley’s make an offer.

Taxman Joshua Waites and why Todd brought the lawsuit

Accountants knew the impossibility and “ran their numbers.” As time went by more info started arising and Todd talks about his heartbreak. He adds, “I just can’t tell you the level of emotion that you have when you find out that someone that you love – more than anything in the world felt…they should “turn us in for tax evasion.” Next, he talked about how the tax people now say they won’t “comment on tax status,” and “investigations.” He finds a “bit ironic.”

Todd Chrisley says that “clearly, that’s not true, as Waites did all of the above.” In fact, he did that in words and text messages. Todd notes that the Georgia Department of Revenue knew for “roughly two years about Josh Waites.” Additionally, many other people filed complaints. But, Todd notes that nothing went any further. And what get’s Todd’s goat is that Waites “takes photos of taxpayers in his car and sends them out just to degrade.” Todd says the photo of the African -American people lurks in the public record of another lawsuit.

Todd feels what Waites did with that photo, “is no different from what he did” with the Chrisley’s and the press. He claims Waites “leaked information to the local news channels in Atlanta, Georgia.” He also says that he told them what was going on. Additionally, he arranged “meetings with Kyle.” Kyle later told Todd Chrisley “what was told to him.” Todd seems disgusted, saying, “to come in the middle of families and try to use your children” comes over as totally “inexcusable.”

Todd notes they tried bending them to their need.

Todd reminded people that they did settle. But notes they only settled on 77 thousand dollars. ”

From two million dollars to 77 thousand?” They denied some of Todd’s “business deductions on his return – not Julie’s.”

And, he notes that legal and accounting fees pushed up his costs very high. Todd Chrisley then said that they filed the lawsuit because of what they went through “for the last two years of our life.”

What do you think about Todd’s explanation as to why he filed the lawsuit against Joshua Waites? Sound off your thoughts in the comments below.