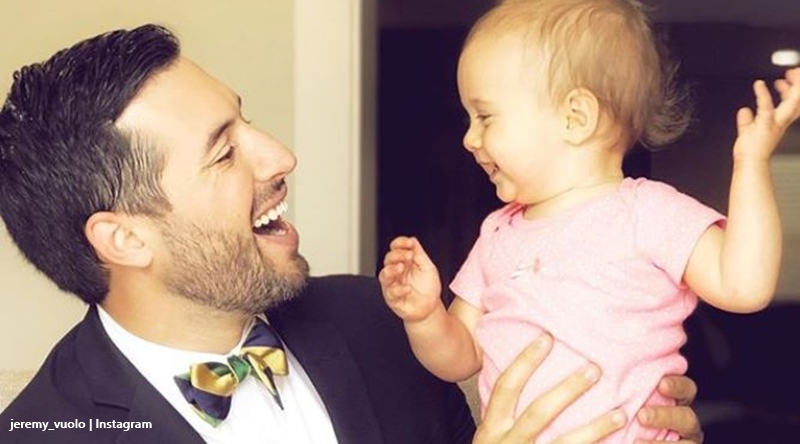 Counting On fans know Jinger dresses well. And, Jeremy Vuolo’s usually very smart. But, they appreciate he knows how to rock a double-breasted jacket. Meanwhile, others worry because Felicity’s wearing those Duggar-style leggings under her skirt. The comments came on an Instagram post that Jeremy shared.

On his Instagram, Jeremy shared a photo that really showed the height difference between him and his little girl, Felicity. He wore a double-breasted jacket, and that’s not all that common these days. Well, outside of weddings, anyway. Jeremy said, “An evening out on the town with my little lady. I can’t believe how quickly time’s flown by!” From his tagged location, it looked like the Counting On family went out for a meal. Actually, they do that so much, that fans wonder if they’ll do a TV show about it.

Fans of the Vuolos complimented Jeremy on his double-breasted jacket.

One follower noted, “You’re literally the only guy I know who wears a double breasted suit.”

Another said, “but @jeremy_vuolo can pull it off! most men can’t!”

A third noted Nick Jonas also does, writing, “@nickjonas does it, too! Both of them look Keep it going, dudes!”

Another fan really liked the jacket, posting, “a bow tie and a double breasted suit has to be worn with intention. You so totally rock in that endeavor.”

Meanwhile, others worried about Felicity.

Felicity rocks a demin jacket, but fans worry about the leggings

Felicity Vuolo’s so popular with Counting On fans. She’s cute, and Jinger dresses her well. Jinger’s really getting good at taking nice photos and often captures the best side of her daughter. In this photo, Felicity’s in a denim jacket over a bright yellow shirt. She’s got little socks and sandals on. But fans spotted the Duggar-style leggings. That never went down too well. One fan noted that the Duggar family visited recently.

They wrote, “Her parents visited so Now the baby has to wear leggings under her dress.”

A few other people noticed the leggings as well. One fan said, “I just thought that! I really hope that’s not the case!” Meanwhile, another follower did say maybe she wore the leggings because it’s cold.

They noted, “She is wearing a jacket after all.” Yet another follower chipped in on that, saying, “Hmmm. In the cold usually, Jinger puts a knitted cap on her. Hope these leggings are not gonna be a part of this little one’s life now.”

An evening out on the town with my little lady. I can’t believe how quickly time’s flown by!

What do you think? Do you think Jeremy really knows how to rock that double-breasted jacket? And Felicity with those leggings? Do you think it’s going to be a Duggar-style feature for their little girl? Or, is it maybe just because it’s getting colder? Sound off your thoughts in the comments below.

Remember to check back with Tv Shows Ace often for more news about Counting On.