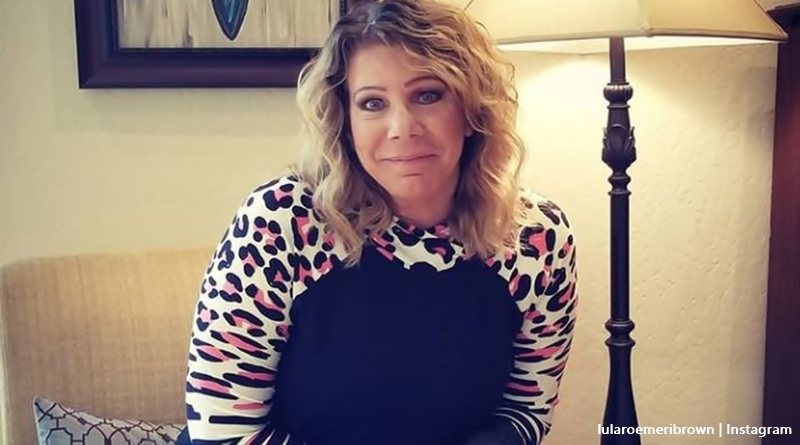 Sister Wives fans who think they may be related to the Brown family might reach out and contact them. But, Meri Brown met a random stranger who never knew of their connection until recently. It turned out that the woman is a previously unknown cousin, and they share the same great-great-grandparents.

It seems like a massive coincidence that Meri spent a couple of days in the company of a stranger, only to discover they’re related. Meri describes the meeting as one of those things the “universe brings” into her life. Also, she notes it’s amazing how it all happened. Meri reminded her followers that it’s been three years now since she started “working with #LuLaroe as an independent fashion retailer.” During that time, she made friends, and found “a community of love and positivity surrounding me.” Then, she noted what happened at the event this weekend.

The Sister Wives star notes that in the company at the event, she met a woman and they spent a couple of days together. At one stage, Meri said she “randomly mentioned” the Lizzie’s Heritage Inn in Parowan. Plus, Meri talked about her “family name.” Then Meri wrote, “She says, wait, I’m an Adams from Parowan too! So, of course, we start looking at the genealogy and asking questions to our parents.” And, excited, Meri notes that because of LuLaroe she found a “new friend… and a cousin.”

I am continually blown away at the things the universe brings into my life. Since making the decision three years ago to start working with #LuLaRoe as an independent fashion retailer, I have experienced amazing moments, met fabulous friends, and have a community of love and positivity surrounding me. Well this weekend didn't disappoint. After meeting this sweet lady @shanelhansenstyle and spending a couple days with her, in one random moment I happened to mention my B&B in Parowan UT and my family name, and she says, wait, I'm an Adams from Parowan too! So of course we start looking at the genealogy and asking questions to our parents. Come to find out that #BecauseOfLuLaRoe I have not only gained yet another sweet friend in my life, but also a cousin! Third cousin to be exact, but cousin just the same! My great great grandparents Charles and Sarah, the original owners of the home that is now @LizziesHeritageInn are her great great grandparents too! I love it when the universe brings you to a place and time that you need to be in!! 💙💙💙 #LivingMyWhy #BecauseICan #LoveWhatIDo #LuLaRoeRetailer #SocialRetailer #FlagstaffFashion #LuLaRoeForLife #LuLaRoeMoreThanJustLeggings #WeAreLuLaRoe #ThanksItsLuLaRoe #LizziesHeritageInn #Cousins #Family

Sister Wives‘ Meri seems ecstatic to find a previously unknown cousin. In fact, to be exact, she notes the friend is her third cousin. She adds, “My great-great-grandparents Charles and Sarah, the original owners of the home that is now @LizziesHeritageInn are her great-great-grandparents too! I love it when the universe brings you to a place and time that you need to be in!!”

Plus, they found more than a family bond. After all, on her cousin’s Instagram, she’s big into LuLaRoe as well. In fact, there’s a family likeness. Possibly something in the way she stands?

The newly discovered Sister Wives cousin’s named Shanel Hansen. On her profile, she describes herself as “Mom Life • Wife Life • Boss Babe Life.” Her motto goes with LuLaRoe which says, “Fashion is what you buy, style is what you do with it.”

Meri’s cousin’s been with LuLaRoe a year longer than she has and celebrated four years back in January. So, all those years went by, and they only just discovered their family link. On Meri’s ‘Gram, Shanel said about her, “Who knew?!!! I’m so grateful we met and now have this fun connection. Can’t wait to head to the B&B and learn all about our ancestors. Have the best week Meri!”

There’s a new girl in town and she can hang with any crowd. She has pockets, covers all the things if worn with leggings & comes with a sash for a more structured look. #lularoemitzi is here for it!!! #lularoe #lularoestyleambassador #tunic #lularoedenim

On her Instagram post, Sister Wives fans reacted to Meri’s announcement that she discovered a new relative. Here’s what some fans said about it:

What do you think about Meri Brown meeting a random stranger at a LuLaRoe event and discovering she’s an unknown cousin? Do you think it’s part of the universe’s plan for Meri that they met now? Have you ever experienced this sort of thing? Sound off your thoughts in the comments below.