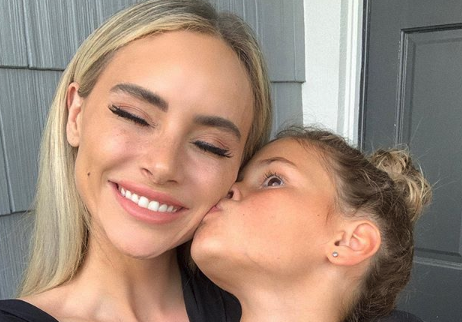 Things seem to be looking up for Bachelor contestant Amanda Stanton. According to Reality Steve, she was out on a date with Brendan Fitzpatrick from Rich Kids of Beverly Hills.

Bachelor Alum On A Date

Just earlier this year, People revealed that Amanda Stanton and her boyfriend at the time, Bobby Jacobs, split. According to a source close to the situation, this tore Amanda apart because she thought things between them were going great.

“Amanda was completely blindsided by all of this and thought that things between her and Bobby were going great,” a source said according to People.

However, they weren’t and they broke up after a year back in April.

It looks like Amanda is getting the chance to move on though. Reality Steve posted a photo of two pairs of shoes together which appear to be somewhere like the movie theater. He says he was sent this photo on Sunday night. So who do the second pair of shoes belong to? Steve says it’s Brendan Fitzpatrick who was on Rich Kids of Beverly Hills.

He also said that he believes they have been dating for about a month.

This picture was sent to me Sunday night of Amanda Stanton on a date at the movies with Brendan Fitzpatrick from “Rich Kids of Beverly Hills.” I've been told they've been dating for the last month. Expect to start seeing this story making the rounds on the entertainment sites. pic.twitter.com/uU14COG7jW

Brendan also went through a rough breakup even more recently than Amanda did. According to another People article, he and his wife split after three years of marriage in August of this year.

Both Brendan and his ex-wife, Morgan Stewart, were on Rich Kids of Beverly Hills togehter. They got married in 2016 after Brendan proposed on the show in 2015. Apparently, the two eventually just grew apart so they ended their marriage.

“I wanted to take the time to clarify that our reason for separating has nothing to do with anything other than two people who sadly grew apart, deciding what’s best for themselves in the next phase of their lives,” Morgan said of the relationship.

She went on to explain that she will always have a lot of love and respect for the relationship and for Brendan.

He must’ve moved on pretty quickly to already be with Amanda. As long as everyone is happy though, it doesn’t really matter how long everyone has been together or apart.

What do you think of Brendan Fitzpatrick and Bachelor alum Amanda Stanton together? Do you think it will work or will the two fall apart? Let us know your thoughts in the comments.

Be sure to return to TV Shows Ace for more news on all of your favorite reality TV stars.