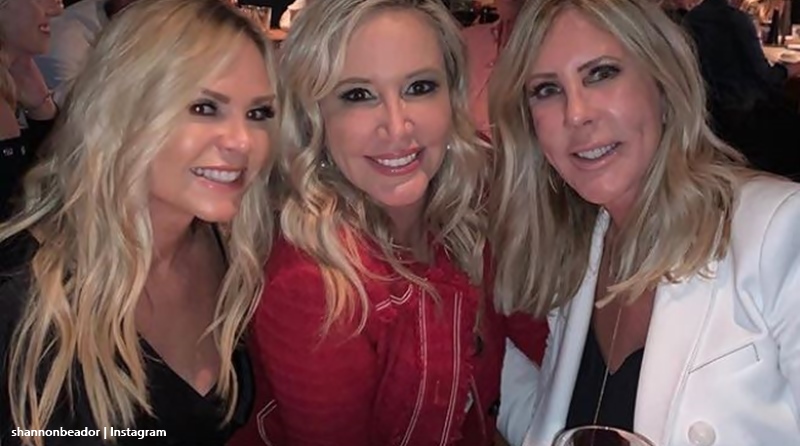 RHOC fans found out that Shannon Beador recently shared her problems with bladder weakness. Following up on that, Reality TV Blurb got a few things out Shannon that rather are interesting. It relates to the ‘Tres Amigas’ doing their own show. Of course, those are Tamra Judge and Vicki Gunavlson, along with Shannon. Now, it looks like there might really be a show the pipeline.

Writer Lindsay Cronin reported on Reality TV Blurb about their exclusive reveal from Shannon. They noted, “While promoting INNOVO, a wearable FDA-cleared device that treats the root cause of stress urinary incontinence, in New York City, Shannon spoke…about the possibility” of a spinoff. They confirmed that “there is a Tres Amigas show in the works… but it’s not exactly a spinoff.”

Shannon explained to them that they plan some sort of “tour.” They hope to make it a “fun show.” So, fans know that they could expect things like “a little skit, maybe a little singing, a little dancing, a few audience interaction things and then a Q&A.” Well, fans of the Bravo show probably would enjoy that. Most especially fans of Vicki Gunvalson who got demoted to OG in the RHOC show. Fans were quite shocked, and it looks like Shannon’s still a bit rocked by that.

If I run, I pee my pants. Does this happen to you? #ad After three kids and going through menopause, my pelvic floor is shot. I’m thrilled to be partnering with INNOVO, a safe and truly non-invasive, at-home prescribed treatment for stress urinary incontinence (SUI). All I want for Christmas is to be leak free…and with INNOVO, my wish can come true. For more info, visit the link in my bio. Check back soon for an update! #myinnovo #12WeekstoLeakFree #incontinence #pelvicfloor

It’s not the first time we heard about the possibility of the Tres Amigas show. Back in July, we reported on it. Our article noted, “Well, it looks like a Tres Amigas spinoff may come to fruition. Well, if not a spinoff, then at least a new venture for the ladies could take off.” We also mentioned, “In fact, if it comes off, fans of Vicki may get over their disappointment at her demotion a lot quicker than expected.”

At the same time, we talked about rumors that  Vicki Gunvalson, Tamra Judge, and Shannon Beador “considered opening a Vanderpump-style restaurant chain.” So, these RHOC ladies still entertain their ambition of getting something going for themselves. Life expectancy in the Real Housewives series can be very uncertain, after all. If they do go ahead with a Tres Amigos show, it would give them something else to do, at least.

Meanwhile, on her Instagram, Vicki replied to a fan who wants her back full-time on the RHOC show. The fan said, “Y’all are too cute!!! Get back as a regular ASAP, please!!! There is less fun when you aren’t there!!!!” Vickie answered, saying, “I agree, but changes need to be made before I come back FT.” So, it looks like Vicki Gunvalson’s not got her tongue hanging out to return full time. But, if she doesn’t it looks like fans can look forward to the Tres Amigas show that Shannon Beador still talks about.

Thanks #burberry for dressing us.

What do you think about Shannon suggesting that the show won’t be a spinoff, but could be a stand-alone live series of events? Sound off your thoughts in the comments below.

Remember to check back with TV Shows Ace often for more news about Tres Amigas and RHOC.