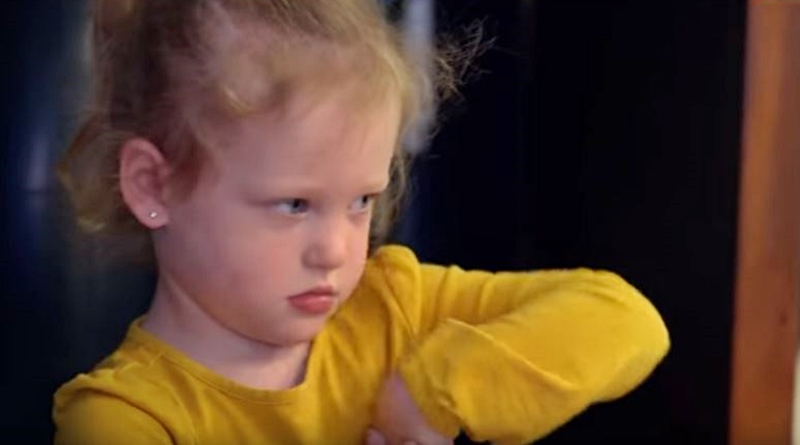 OutDaughtered fans heard from Danielle Busby that she’s been suffering a bit of “mom guilt.” But now she’s off to the NICU Reunion and “feeling blessed.” The Busbys shared a cute pic of Blayke and the quints with Danielle, and fans grow concerned for Parker. All the kids look mischievous or happy, but Parker’s looking completely different. Should fans worry?

TV Shows Ace reported this weekend, that Danielle Busby’s feeling a bit of “mom guilt.” It seems she struggles when she fails to constantly react to the quints and Blayke with love and positive feelings. But, most moms battle with that at times. We noted, “Danielle says when she gets mom guilt, she knows “the enemy” – Satan – “has a field day.” She thinks he fills her with guilt and he tells her she’s “a failure as a mom.” But, later she shared a photo of them on their way to the NICU Reunion.

Looking much happier, the OutDaughtered mom said, “My little bundles of joy….that may make we want to pull my hair out at times… but man! I SURE DO LOVE THEM LIKE CRAZY and feeling super blessed and emotional as we arrive at the NICU Reunion!” Some fans noted that big sister to the quints, Blayke is really Danielle’s “mini-me.” A few others loved that Hazel’s got her very own looks. And, others mentioned they still struggle to tell Ava and Olivia, the twins, apart. But some of them noticed that Parker looked very sad.

Noticing Parker really looked down, fans commented on the OutDaughtered quint. One of them said, “Parker always looks so sad 😞.” Another said, “she does😔.” But one follower suggested, “She’s just shy compared to the others. At least I hope so.” When one follower suggested she just looks “a bit sulky,” another fan disagreed. They wrote, “She’s just shy n dont like be in spotlight n prefer be w daddy more than mommy in pix but this pix just no daddy in pix.”

But on a more serious note, one of the fans noted, “Parker is different than her sisters. Hope she is still getting counseling. No child should have that expression.” Another follower recalled that at one stage, they thought the show mentioned Parker might “suffer from anxiety.” Others thought that if she isn’t getting counseling she definitely should. Another person, that most fans disagreed with, even thought that she may suffer from autism. But are they worried about nothing? Do the Busby’s have it under control?

Parker and her anxiety

TLC actually covered Adam and Danielle’s concerns about Parker possibly suffering from anxiety. You can see the clip below. They noted that “Adam and Danielle are getting concerned with Parker’s behavior in new situations and decide to take her to an occupational therapist to assess whether anxiety is to blame.” In the clip, we saw the OutDaughtered dad saying, “I’m glad we’re taking this step.” He hoped to “come away with a better understanding of how to help her.” He also mentioned that Danielle and he were on “opposite sides” and so he hoped a professional could “guide” them through it.

The therapist noted Parker was very shy, shutting down, and unresponsive to questions at first. But, she got her playing eventually. It’s hard for the OutDaughtered parents as Adam noted, they don’t really know what she’s thinking. The therapist actually said she never really reached her either and suggested they let her play as much as she can with other kids. She advised them that they should be there for her, but mostly push her into situations, assuring her that she’s safe.

In the end, the therapist suggested if her behavior still continues, they should look at talking with a psychologist. More recently, in October, Meaww.com noted that fans felt possibly the worst thing they could have done was take the OutDaughtered cameras to the session. After all, it’s obvious Parker’s not comfortable with the spotlight. Perhaps that’s why Parker often looks disconnected or sad when she poses with the other quints for photos. But, the family seems aware of the problem so hopefully, they are still monitoring Parker. Surely, they must still worry, much like fans of the show.

What do you think about Parker still looking unhappy in photos of the Bubsy family? Do you think fans are right to worry? Or, are Danielle and Adam Busby probably still getting professional advice? Sound off your thoughts in the comments below.

Remember to check back with TV Shows Ace often for more news and updates about OutDaughtered.