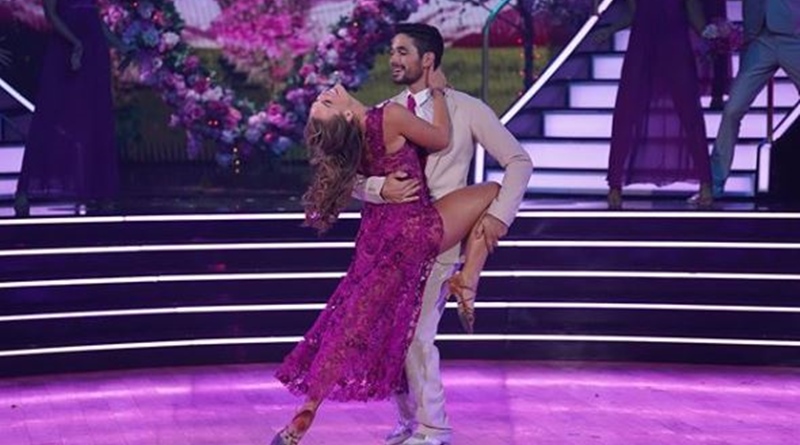 DWTS fans know that the show brings Disney Night. And, excited and happy, fans can’t wait for it. Both Hannah B and Alan Bersten posted about it on their Instagram accounts. Many fans got a giggle at the different viewpoints between the two stars. Alan Bersten’s made them laugh so much, as he shared a totally different type of picture.

Fans of the show will see Hannah and Alan dance to A Whole New World from Aladdin. That’s the new version by Zahn. Hannah B shared a few pics of them at Disney and captioned it with, “living my dream come true.✨ who’s ready for Disney night? 🙋‍.” The pics do look magical and fans can’t wait to see it all happen on Monday night. Alan Bersten chipped in with his comment, saying “Fireworks!” DWTS fans once again commented that they wish Hannah and Alan would start dating. But, that’s not allowed on the show, so even if they did, they wouldn’t say anything right now.

Others loved Hannah’s outfit which showed her long and slim legs. Those who wished they had legs like that might need to start dancing a lot in high heels. Others wished they could be at Disney, and some unfortunate followers missed Hannah B by minutes outside the castle. But one fan said, “I fangirled at her in Disneyland and she just bro-nodded me. Moving on. #sitdown #behumble.” One person said they missed seeing her, and they worked at Disney. Meanwhile, some fans laughed at the very different post that Alan shared on his IG.

Some sharp DWTS fans noted that Alan also shared pictures of Disney Night, but his post was completely different. Over on his IG, his photo showed Hannah holding him and carrying him. Not an easy job wearing heels! He captioned his post with, “This feels right. @disney night 🎉.” Many fans loved that post, and here’s what some of them said about it:

You can take a look at the two photos below.

Sound off your thoughts in the comments below if you think these are very funny photos of Hannah B and Alan Bersten at Disney Night.

Remember to check in with TV Shows Ace often for more news about DWTS.