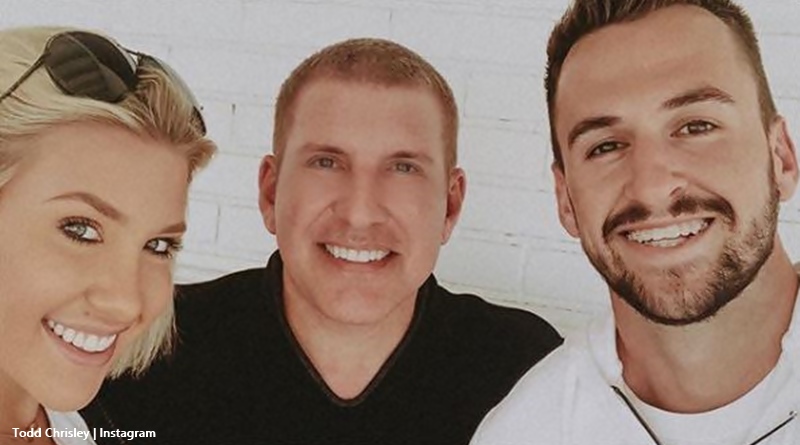 Todd Chrisley looks rather upbeat since his Georgia tax issue got tucked away. While he still faces more legal problems, he’s still smiling. He hinted at a new show or podcast for Savanna and her fiance Nic Kerdiles. Some fans trolled on him, but Toddy quickly slammed them.

Todd took to his Instagram this Wednesday and shared a photo of his daughter and Nic, along with himself. Smiling his charming smile that belies his crocodile teeth, he suggested we should all watch out for some news. He captioned the post with, “So debating as to whether or not to share something these two, @savannahchrisley and @nickerdiles have been working on or to let them do it? Is it their own show, is it a YouTube special, is it a podcast, IS IT????”

Well, a multitude of fans responded to the idea. Thousands of fans follow Todd Chrisley and they hang onto every word he says. One fan said, “Whatever it is, it will be great! ❤️. Meanwhile, another just wanted to know more. They commented, “Tell us. Don’t leave us hanging! Lol.” One fan suggested, “newlyweds’ that would be cute and I would watch!” Others don’t really care what it is, as they think anything the couple does will bring fun and grace to television. Meanwhile at least one person trolled on the post. They might regret that as over 400 fans chipped in against the hate.

Troll slammed by Todd and many fans support him

One follower trolled on the post by Todd Chrisley. But, he bit back, and he’s well known for standing up against haters. The troll wrote about Savannah and Nic, “More plastic surgery and botox?” Todd’s comeback said, “no, we figured out that doesn’t stop trolls like your thirsty *ss from commenting.” Well, more than 400 fans loved that comeback, and that’s one troll who got a load of people telling them off for their hateful comment. Here’s what just a few of those fans said:

What did you think of Todd’s slamming comeback on the troll? Are you excited to hear what Savanna and Nic Kerdiles might be up to? Is it a new show perhaps? Sound off your thoughts in the comments below.

Jill Dillard Shows Off Her Garden – Does She Have A Green Thumb?
‘1000-Lb. Sisters’ Rumor: Wait, What is Amy Halterman Retiring From?!
‘The Bold and the Beautiful’ Spoilers, June 21-25: Thomas Gets The Shock of His Life
New Series ‘Love In Paradise’: Is It Just Another ’90 Day Fiance’ Spinoff?
Khloe Kardashian Facing Backlash As Fans Accuse Her Of ‘Blackfishing’