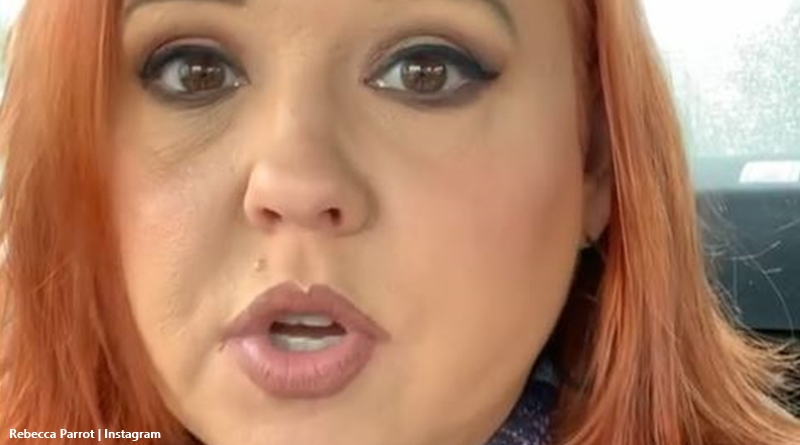 90Day Fiance fans expressed their concern for Rebecca Parrot after the recent episode of the TLC show. In the episode, Zied found a picture of one of Rebecca’s exes. Rebecca admitted that Zed could be quite a jealous person, and he was angry about the photo on her phone. Some fans commented that he held her by the neck and looked very abusive. But Rebecca just squashed those accusations about Zied being abusive.

Very concerned fans spoke up. On Instagram, and over on Twitter, previously abused people suggested his stance was classic abuse. Actually, grabbing someone by the back of the neck is often a very dominant thing to do. But Rebecca feels those people saying the 90 Day Fiance star’s being abusive should be more responsible. She took to her Instagram to explain that nothing bad happened to her.

In fact, she noted that we only saw Zied after he relaxed a bit more about the photo. She claimed she was the one who got furious. As everyone would do, when someone goes through your personal stuff on a phone. Now, Rebecca claims we saw something misrepresented in the preview. She said that Zied came to say how sorry he was. The hand on the neck pulled her closer to just apologize to her. She also claims in no way did Zied make her feel at all threatened.

On her IG post and in the video, she said that she needs to make something “very clear.” Rebecca added that the 90 Day Fiance star has “never been abusive” and he “would never be.” Additionally, she noted that people who “make light” of what they see online should stop. While she admits the preview’s a bit “misleading,” the actual full scene showed Zeid “apologizing” to her. As Rebecca grew very angry, she “pulled away” from Zied.

Rebecca’s concern with 90 Day Fiance fans who think she’s okay with abuse stems from her previous relationships. “As an abuse survivor in previous relationships, I would never allow this, and would never make excuses for it,” she said. Plus, she notes that neither TLC or Sharp Entertainment would ever allow it. Mind you, some fans might wonder about that with Angela Deem and her abusive behavior. Anyway, Rebecca assured fans that she’s not “making excuses.” Actually, from past experience, she really won’t condone abusive behavior at all.

Rebecca noted that women who live in abusive relationships watch the show. Her concern arises around the fact that they may stay in a bad and dangerous situation just because they think she does. The 90 Day Fiance star ended by reminding people that “it is never okay to be in any relationship that is even slightly abusive.” Plus, she reminded people that reality TV creates drama and in this instance, that applied to her.

What do you think about Rebecca Parrot squashing the allegations that Zied’s abusive with her? Do you think the editing in the preview made it look a lot worse than it really is? Sound off your thoughts in the comments below.