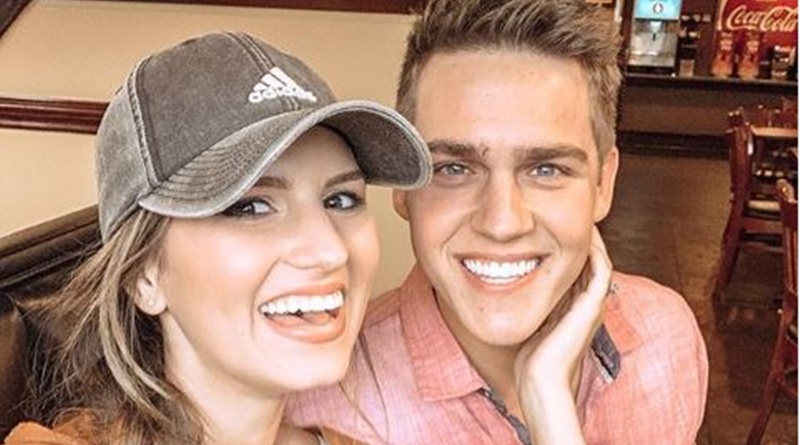 Bringing Up Bates fans know that Carlin Bates and Evan Stewart expect a baby. Of course, they’re really thrilled for her. But, when she posted a photo of them at the beach, someone mentioned flesh-eating bacteria. Should Carlin worry about that at Orange Beach, Alabama?

Taking to her Instagram, Carlin shared a photo of her and her hubby Even Stewart on vacation. The sea’s behind them, and they look happy, young, and in love. So, it’s rather strange that some people complained about it. She captioned the photo with, “It’s vacation 🤩🌴☀️💦.” Some fans thought that maybe they were on a babymoon as she’s pregnant. But others noted they were on vacation with the Stewart family. Another pointed out that they just had their honeymoon, but even if they did go on vacation again, Evan works hard and also deserves a break. Talking about affordability, one follower noted that Bringing Up Bates, like other reality shows brings in an income.

But then, one fan got concerned about flesh-eating bacteria. It came after one follower, who seems to know a lot about the family, said: “they went to orange beach, Alabama.” The worried fan said, “Have you guys even heard all the news of the flesh eating bacteria in those beach waters and you are pregnant??? Please please be careful!! WHY take that chance??” Well, it is becoming more common but should Carlin worry about it?

Should Carlin worry about flesh-eating bacteria?

A report came out in June this year, about a man who got very sick from a bacterial skin infection. The Monroe Journal noted that “For Kenny Cross of Lackey, a four-day weekend getaway to Orange Beach, Alabama in May was a nice vacation.” It’s the same area where our Bringing Up Bates mom-to-be went. Kenny started feeling very sick. His experience was so bad, that he said he really didn’t know what was going on for a while. After doctors saved his life, he advised, “Swim in the pool and look at the water…I’ve heard several stories [of bacteria contractions], and people are still piling to the beach and piling in the water but won’t quit until it happens to them.”

The same article notes that “Mississippi, Alabama, and Florida are among the list of states with beach monitoring programs, which track enterococcus bacteria levels in the water off of coastlines.” While they also note that the bacterial infection Kenny got was not actually a flesh-eating bacteria, it was still a bad incident. And, they note that you can take precautions. Alabama Department of Public Health Environmental Toxicologist Dr. John Guarisco suggests people go out and enjoy themselves, but take care. Avoid “murky water,” and “swimming near waterfowl.” They especially need to watch out for cuts and scratches. They should wash anything like that properly and apply an “antiseptic ointment.” So, probably, the Bringing Up Bates star will be fine if she’s careful.

According to an article by People, climate change could be behind the increasing reports of beach-goers encountering flesh-eating bacteria. But, they cite the Centers for Disease Control as saying, “the most deadly form, necrotizing fasciitis, is very rare, with just 20,000 cases a year, and people should not spend their lives fearing the water. Chances of contracting it is unlikely, especially if you’re healthy and have a strong immune system.”

What did you think about fears for Carlin Bates Stewart visiting Orange Beach in Alabama for a vacation? Do you think fears about flesh-eating bacteria are a real concern, or not? Sound off your thoughts in the comments below.

Adam Busby Takes Quints Shopping For Vera Bradley Lunchboxes
‘Teen Mom 2’: Chelsea Houska Has A New Look And Fans Are Not Happy
Mike Youngquist’s Uncle Beau Gets Brutally Honest, Natalie Is A Slob
Which Duggar Courtships Seem To Be In The Works?
Adam & Danielle Busby Praised For Recent Parenting Move With Hazel