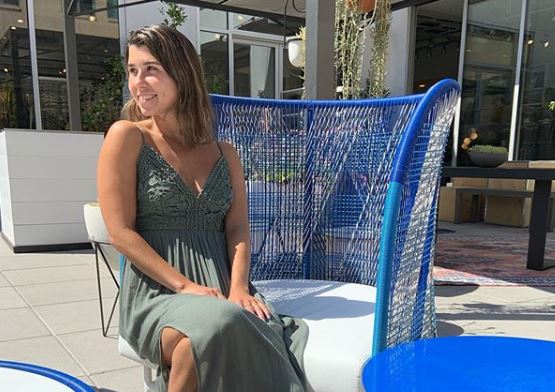 Fans of Married at First Sight bid farewell to the Season 9 couples less than three weeks ago and probably no other participant in the arranged marriage reality show was wished greater success after the cameras left than Amber Bowles.  The middle school teacher admitted over and over that she was willing to do “anything” to help her marriage to professional basketball player Matt Gwynne’s work.

Unfortunately, it’s tough to make any marriage succeed when one of the partners cannot manage to stay home.  Despite Gwynne’s declarations of “really caring” about Amber Bowles, as he maintained even during the broadcast of the Season 9 Married at First Sight reunion show, Amber was provided with ongoing evidence from within the Married at First Sight circle of couples and from teachers at her school that Matt was otherwise engaged outside of matrimony.

Amber Bowles discussed that she indulged in her own “wild time” right after the eight weeks concluded, but now, the petite and loyal ex-wife hints that there may be another Married at First Sight man in her life.

A Married at First Sight man from a different season

Fans will remember Will Guess from Season 8 when he and Jasmine McGriff went all the way up to Decision Day before Will decided to part ways.  Their biggest hurdle surfaced early on when Jasmine wanted to be respected as a “strong, independent woman” but still have Will paying all the household bills just like her daddy did.  Another issue was that Will wanted a deeper emotional connection in intimacy over merely physical attraction.  The experts were disappointed that the pair couldn’t find a way to last, and let love develop.

Amber Bowles had a surging attraction to her lanky groom, and physicality was never a barrier in the marriage.  The new bride spent nights soaked in tears, feeling that she was “not enough” for her husband, who was always “with his boys” like during his single days.  They tried abstaining from intimacy in order to develop deeper emotional bonds, with some success, before Gwynne was gone for days at a time again, and will

Amber has shared a couple of recent photos of herself and Will Guess together on her social media, like Monsters and Critics reports on October 4. One playful pic is from a place called The Candle Bar, where the two look to be sharing coffee. In an Instagram story, another photo shows a cozy Amber Bowles and Will Guess in a casual, tender hug, surrounded by a backdrop of hearts.

Fans were mostly supportive of seeing Amber Bowles with the former Married at First Sight groom, and a few couldn’t wait to get Jasmine McGriff’s take on the situation.  She graciously obliged, being positive about “the swirl,” and let’s hope Amber doesn’t have any trouble spending cozy time at home with Will.

Come enjoy wine and a very good time with Hellen at The Candle Bar!!! @paddywaxcandlebar

Amber is more than enough

The most important lesson that Amber Bowles took away from her Married at First Sight experience was learning to value herself, as she described during the reunion show profiles.  In her commitment to give her all with Matt Gwynne, she lowered her standards “way beyond any other relationship” in her past.  Her former husband’s lack of respect for even “minimal standards” requested started to wear on the petite bride.

Some of the best ladies I know ❤️

Dr. Pepper Schwartz reminded Amber of the mantras “I can handle it” and “I’m more than enough” through the hardships of her marriage.  Regardless of who shares future happiness with Amber Bowles, discovering self-value and appreciation is already a lifelong gift.  As friends, or more, many more smiles and hugs to Amber and Will.

Don’t miss Married at First Sight when it returns with new episodes.

‘The Bold and the Beautiful’ Spoilers, June 21-25: Thomas Gets The Shock of His Life
‘RHOBH’: Is Lisa Rinna A Hypocrite When It Comes To Her Friends?!
WOAH!!! Hannah Brown Destroys Sh!t In ‘Thrash Therapy’
‘Sister Wives’ Janelle Brown Shares Rare Photo Of Her Father
Thirsty ‘Too Large’ Fans Agree Dr. Procter Is A ‘Daddy’