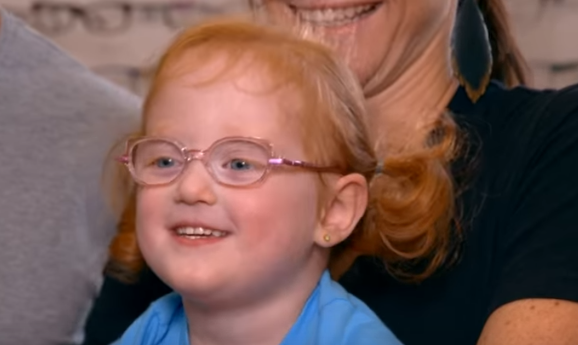 It’s still hard to believe how fast the six daughters of Danielle and Adam Busby have grown throughout the years, even for fans who have been watching OutDaughtered. Though these fans were saddened by how quickly the last season flew by, the family is back with new content.

Hazel Will Have To Deal With Her Eye Condition Forever, As There Is No Cure

Y’all…i just love this little girl. Always got something silly on her head. 💕🤪 #imcute #hazelgrace #itsabuzzworld

As many know, Danielle and Adam had their rise to fame for being the only couple in the U.S. with all-female quintuplets. Now the quints are four-years-old and developing their own personalities, proving to be quite the handful for the couple.

The five children definitely look similar, but one in the bunch easily stands out. Hazel Busby is a little red-headed beauty with glasses, she’s had an eye condition since birth. She recently got new glasses on the show, causing her to experience several emotions.

Hazel definitely looks adorable in her new glasses, but there’s a reason she’s got them at such a young age. She has a condition called nystagmus which causes the eyes to move uncontrollably. The condition is treatable, but it seems it can only hold off the symptoms for a bit, not cure the condition completely.

Adam also seemed nervous about his little girl. “Everything that you do and tell yourself to prepare for this surgery can never really prepare you enough for seeing your baby in her hospital gown and then giving her away,” he added.

One surgery doesn’t look like it’s the last one for Hazel. Adam and Danielle discussed the condition with UsWeekly. “It’s something she was born with and she’ll have it the remainder of her life… there’s no official cure to it. It’s inevitable that one day she’ll have another one, and so we visit her eye doctors every couple of months.” Danielle told the interviewer.

The new season of OutDaughtered gives fans more of a look inside the lives of the Busbys. This includes Adam and Danielle taking Hazel to get her first pair of real glasses, instead of toddler ones. Danielle mentioned that the doctor said if Hazel is still having the same issues after her new prescription, another surgery would be necessary. She said there’s a lot riding on how Hazel responds to the glasses.

Once Hazel had her new big-kid glasses on, she was ecstatic in the mirror. She told the cameras, “I like my new glasses.” But then she got in the car and her attitude completely changed. Hazel nearly broke the glasses and Danielle scolded her, Hazel broke out screaming and crying. Adam realized the glasses were hurting Hazel behind the ears, but then she was able to push them up and relieve the pain.

Later, when they all got home, Hazel wiped her tears and perked up about the glasses again. She yelled in the car, “I get to show my sisters!”

Hopefully once Hazel adjusts to her new glasses, the pain will subside and she’ll love them more than her old pair.

Jeremy Vuolo’s Recent Posts Get A LOT Of Attention
Jarrod Schulz Shakes Things Up With Girlfriend Pic: Where’s Brandi?!
Elizabeth Johnston Adds A New Member To Her Family: Meet Georgia
THAT’S A WRAP! ‘LPBW’ Filming Complete: Is The TLC Series Finished?
Julie Chrisley Dishes: Who Is Her Favorite Person To Cook With?