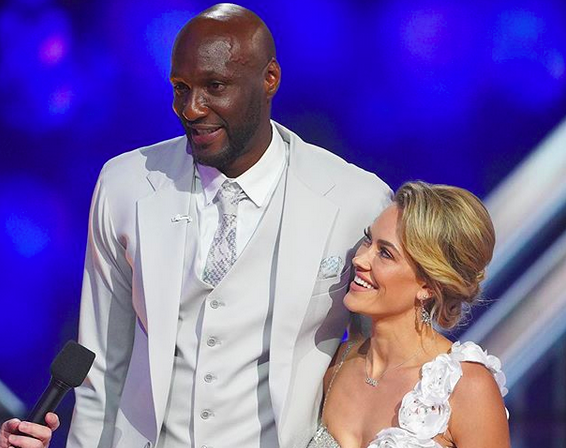 On Monday night, Week 3 of Dancing With the Stars aired. As usual, it was an action-packed DWTS episode. Hannah B. of The Bachelorette had a great night. Unfortunately, Lamar Odom and his partner, Peta Murgatroyd, are going home. In addition, Lauren Alaina, former American Idol star, took a moment to share some personal news that is going on in her life.

This week, Lamar Odom and Peta Murgatroyd went home from the DWTS stage. After the Viennese Waltz, the duo scored a 20 out of 40. In the end, the risk for elimination was between Queer Eye star Karamo Brown and Lamar. Finally, it was decided that the former NBA star would be the one to go this time.

On the show, Judge Carrie Ann Inaba said to Lamar, “It takes so much courage to come back out here after constantly not getting great scores and really be vulnerable.” Fans are happy to hear that Lamar is getting some appreciation for his hard work and good attitude. In the past, he has said that being on DWTS “is a blessing”.

After the show, the DWTS Instagram account shared a photo of Lamar and Peta. In the comments section, fans are saying that the judges are unfair with Peta and Lamar. They think that the dancing pair deserves better. Plus, they say that a couple of the judges are mean. Right now, it looks like fans aren’t too happy with the results of the episode.

Lauren Alaina opens up about her personal life

On the week 3 episode of DWTS, Lauren revealed some personal news. She danced the foxtrot to Dolly Parton’s “Jolene” with her partner Gleb Savchenko. Then, she spoke with DWTS co-host Erin Andrews. She said, “I had a crazy, crazy week. My cousin Holly had a brain bleed and she slipped into a coma earlier this week. I went home and we missed a few days of rehearsals. And I was like really stressed and my family told me to come here and I want to dedicate the dance to you, Holly. We’re praying for you. We’re believing in a full recovery. We love you.” After she shared this news, Lamar and Peta were sent home.

On the official DWTS Instagram page, a photo of Lauren and Gleb was shared. In the comments, fans are leaving all kinds of encouraging messages for Lauren. Of course, they are also sharing how blown away they are about the performance. It seems like fans are impressed that she can perform so well, even after missing a few practices and being under so much stress. Despite all of this, the duo scored a 32 out of 40.

So proud of @laurenalaina and #TeamTonkyHonk for that beautiful Foxtrot after an exceptionally tough week. 💖🌸 #DWTS

So, are you happy with the outcome of week 3 of DWTS? Now, who are you rooting for? Leave a comment below and share your thoughts about the recent episode.

Don’t miss Dancing With the Stars on ABC on Monday nights at 8pm ET. For more updates about DWTS and your other favorite TV shows, follow along on Facebook and Twitter.

Is It Too Late For Jill & Jessa Duggar To Sue Josh For 2002 Molestations?
Todd Chrisley Talks About People Who Stab Him In The Back
Candace Cameron Bure Shares She Censors Herself For The Kids
‘Manifest’ Season 4: Canceled Or Renewed?
‘Welcome To Plathville’ Season 3 Premiere Date & What To Expect