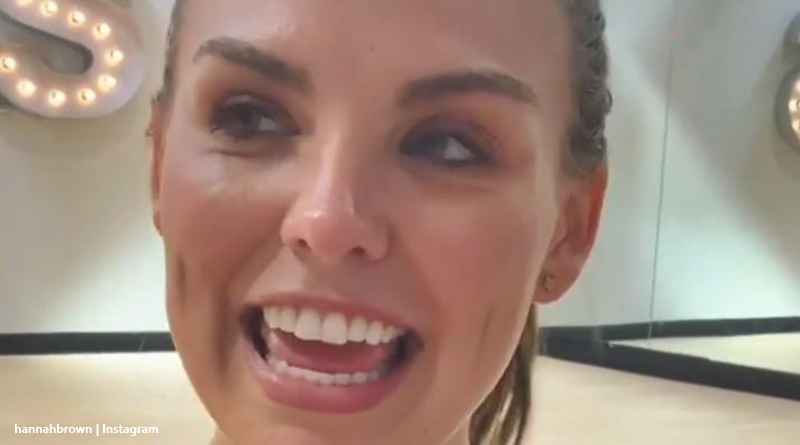 DWTS brings Hannah Brown and her pro-dance partner Alan Bersten. And, she’s getting really good at it. In fact, TV Shows Ace reported that Sharna Burgess thinks she could win it. On late Sunday night, Hannah took to her Instagram and shared a stunning, dark photo. Judging by that, there could be a future for her in Stars Wars, or as a super-heroine. And, those muscles!

DWTS Hannah B looks amazing in her latest stunning photo

We’ve all seen Hannah B looking beautiful. But this photo shows a really strong woman, looking ready to kick *ss across the galaxy. In fact, one fan guessed the shot was probably of them dancing a “Kylo Ren/ Ray dance.” In fact, it’s not a bad comparison, especially as Star Wars: The Rise of Skywalker is hitting theaters at the end of the year. But, maybe she won’t ever land that particular role as Comicbook reminds us, “it will serve as the final chapter in the long and beloved Skywalker Saga.”

Nevertheless, with her well-defined muscles, stern expression, and stunning costume, the DWTS star could easily be a superheroine. On her post, Hannah wrote the caption: “Bring it on, we love it. @dancingabc here we come. #teamalanbamahannah.” Well, fans are all for this style as it’s a diversion from those soft pinks and purples that usually surround The Bachelorette alum. Actually, soft and overly fragile’s less seen these days. Hannah’s getting a rep for being super-strong.

Strong woman, superheroine, and destined for the big screen?

TV Shows Ace reported that Hannah B’s looking to a career in television. But, why not the big screen after Dancing With The Stars? She’s looking fantastic, looks really toned and physically strong. And, Marie Claire noted she’s become something of a feminist role-model. Commenting on her Instagram, one fan said, “Prediction – Star Wars franchise here we come Hannah B – superhero.” Others noticed those muscles. This commenter said, “Them arm muscles.” Another DWTS fan said she looked “really fierce.”

Other fans hope she gets right through to the tour. “This is gonna be great! Fingers crossed you’re gonna join the DWTS tour so we can watch you dance in person!” said one fan. “Fierce, not fancy. You go girl!!” said another. And one fan noted that Adam looked “really hot” as well. “Yes, girl! Embrace those battle scars!” one fan noted. Meanwhile, a bit of a wittier commenter added, “Your face when someone brings up Luke p.”

bring it on, we love it. @dancingabc here we come. #teamalanbamahannah

What do you think of the stunning photo that Hannah Brown shared on Instagram? It certainly makes her look strong and ready to kick some *ss across the galaxy! And why not? She’s been through a lot and looks to totally wow the audience with this fiercer side to her personality. Sound off your thoughts in the comments below.

Remember to check back with TV Shows Ace often for more news from Hannah Brown on ABC/CTV’s DWTS.