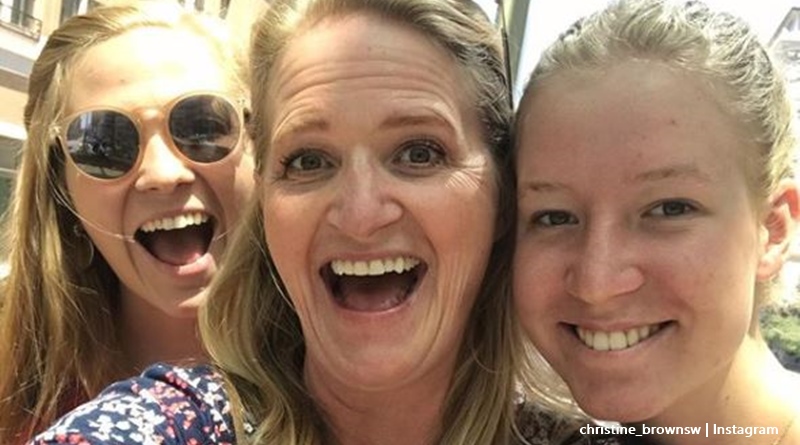 Sister Wives fans love Christine Brown for her sometimes dry sense of humor. Often, her teasing comes in for some criticism, as she comes across wrong. This weekend, she and Gwendlyn hung together and she teased her other daughters about not being favorites. Naturally, we saw a reaction from them to the Instagram post.

When five sisters belong to one couple, obviously they can’t all be favorites. Christine spoke about teasing her other daughters, Aspyn, Mykelti Ann, Ysabel Paige, and Truely Grace.  She shared a photo of her and Gwen at Oktoberfest. Actually, the photo looked quite funny, as the tree behind Gwendlyn made her hair look a bit odd. One fan noted, “I thought the tree behind Gwen’s head was her hair.” Gwendlyn, with much the same sense of humor as her Sister Wives mom replied, “I did too! I was seriously disturbed.”

Christine’s caption read, “Chillin at #oktoberfest with my favorite daughter! If the rest of them hung out w me more often then maybe they’d have a chance at favorite 🤷🏼‍♀️.” Of course, that got some responses from the rest of the sisters. Mykelti noted, “Wow dude!!! I live in a different state.” Then Aspyn, who lives in Utah, commented on her mom’s post. She said, “mom! You did not write that caption. Right?” Fans agreed that maybe Gwendlyn did. And Gwendlyn made a comment saying, “Being the favorite sure feels powerful.” Ysabel responded with, “That was hurt 😂😭.” And, Truely may not have seen it. Anyway, she might be too young to go to Oktoberfest.

Lots of fans enjoyed the banter between Christine and her daughters. Of course, we know from the Sister Wives show, that she loves each and every one of them. Other fans joined in the fun and here’s what some of them said:

Chillin at #oktoberfest with my favorite daughter! If the rest of them hung out w me more often then maybe they’d have a chance at favorite 🤷🏼‍♀️ #flagstaff #momlife

What did you think about Christine Brown teasing her daughters about not being favorites? Do you think they’d hang with her a lot more if they could come home more often? Sound off your thoughts about favorites in the comments below.

‘The Young And The Restless’ Spoilers, June 11-14: Summer Needs To Watch Her Back
Netflix’s ‘Virgin River’ Season 3: Release Date, What To Expect
Tammy Slaton Warns Jerry Sykes’ New Girlfriend To Be Careful [Exclusive]
Are Joe & Kendra Duggar At Odds With Jim Bob Because of Josh?
Is That Ava Or Olivia Busby’s Squishy Face? Fans Still Have No Idea