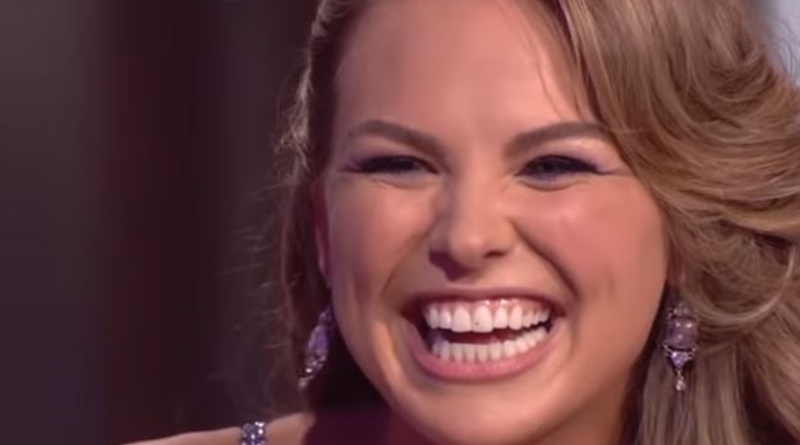 DWTS fans know that Hannah B and Alan Bersten seem to be getting it together. At least, on the dance floor if not as a romantic couple. And their performance was noticed by pro-dancer alum Sharna Burgess. She talked about how Hannah could even win in her chat with Bobby Bones on the BobbyCast podcast.

While on the podcast, Bobby Bones and Sharna got to talking about Hannah B. While we know Sharna never got invited this year, despite winning last season with Bobby, she’s taking a lot of interest in it. And, we see Hannah B, who started off a bit fragile and working through The Bachelorette issues doing quite well. TV Shows Ace reported about how Hannah B uses dance as a sort of therapy. In our report, we noted that she freaked out ahead of the show. But, she found a way to deal with her issues in dance therapy. And, she seems looser now. That’s not gone unnoticed by Sharna Burgess, who likes her.

Sharna spoke about how very well  James Van Der Beek and Emma Slater and Kate Flannery and Pasha Pashkov perform as well. Sharna said that if she had anything to do with appointing a winner, she’d probably go with James and Emma. She really likes James. Actually, from her viewpoint, he’s “the best dancer in the competition.” The DWTS alum thinks “Emma’s a fantastic partner.” But, it’s not down to her, and Sharna thinks that Hannah B, who everyone seems to like stands a chance.

Sharna thinks Hannah B could win

Well, if Hannah B’s feeling a little bit insecure still, she can take some comfort from Sharna. After all, Sharna really knows the ropes when it comes to dancing. While Hannah’s not her top choice to win, Sharna thinks she could very well make it happen. While she likes James for it, she thinks the grand dance-off is likely to come between him and Hannah. Sharna said, “I would love to see James and Emma win but I think it may come down between him and Hannah.”

Meanwhile, E!News reported that Bobby and Sharna also mentioned a few of the new changes to the show. Perhaps Sharna never got asked back this season as she’s not happy with how it’s going behind the scenes. In the past, the DWTS pro said that “the creative process — the song, the set, the colors, the costumes, everything came from her brain.” The whole lot got put together by the team. But now, the dancers don’t get that opportunity. Basically, everyone gets told how to dress, what to dance to and how to do it.

Sharna feels that giving all the creativity to a director seems a bit odd. She notes that she would feel it a bit hard to surrender that side of it. However, she admits it might make things a bit “smoother behind the scenes.”

What do you think about Sharna Burgess thinking Hannah B could go all the way and maybe even win this year? Sound off your thoughts in the comments below.

Todd Chrisley Refuses To ‘Clean Up’ Rumors, Says He Doesn’t Give A F*ck
What Does ‘The Witcher’ Creator Think Of Henry Cavill’s Geralt of Rivia Portrayal?
‘Below Deck Med’ Season 7 Spoilers: Courtney & Mzi Together Again?
‘Below Deck Med’: Did Lloyd Spencer Quit Yachting?
RHOC: Braunwyn Windham-Burke Reveals She Is Moving To New York