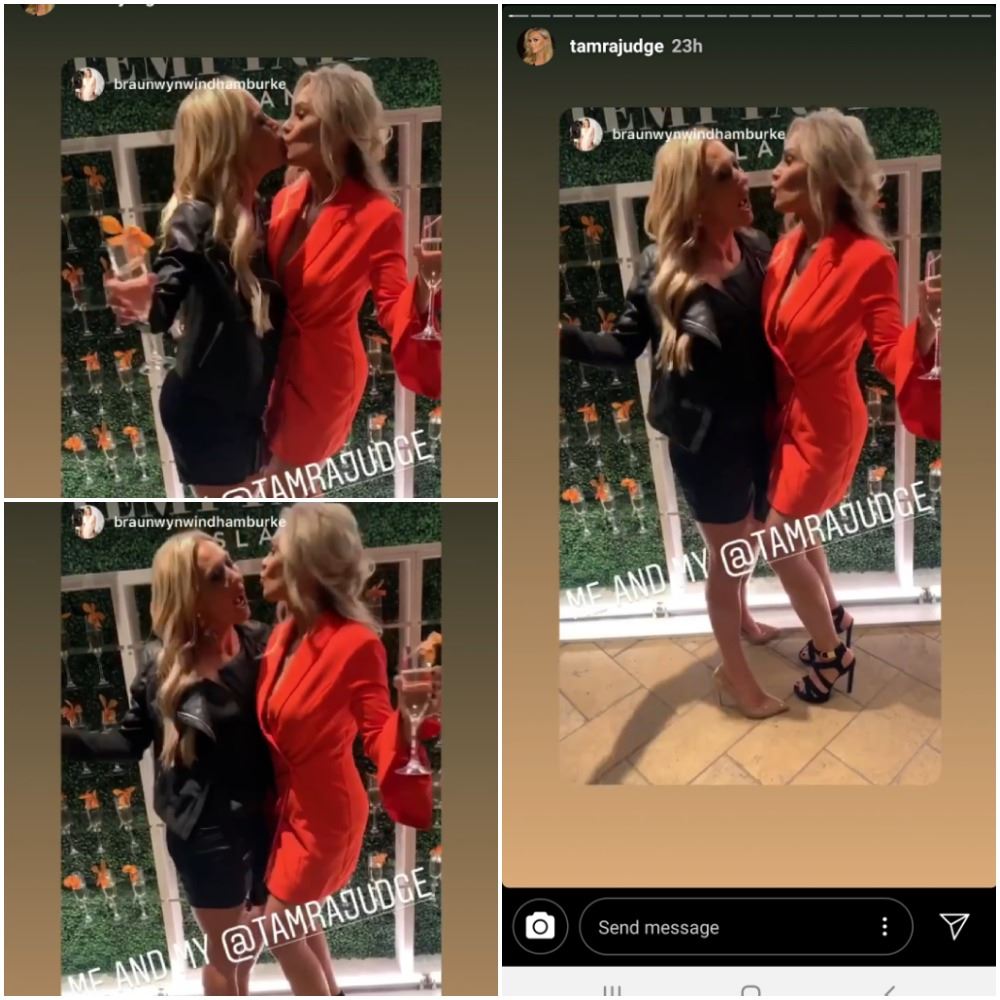 RHOC stars Tamra Judge and Braunwyn-Windham-Burke attended the premiere of Temptation Island with their husbands. They seemed close and even shared a kiss they captured for their Instagram Stories. Normally this would just be girlfriends playing around, except Braunwyn made an interesting comment about Tamra that made fans a little more invested in this kiss.

According to Hollywood Life, Tamra and Braunwyn were partying the night away in celebration of the premiere. Eddie Judge and Sean Burke look thrilled to be next to their ladies. Tamra wore a bright red hot dress with black strappy heels. Braunwyn wore a black mini-dress and leather jacket.

Why Were Fans Excited By Tamra Judge Kissing Braunwyn Windham-Burke?

On an episode of Real Housewives of Orange County, Braunwyn let it slip that they engaged in threesomes for milestone birthdays. Like when Sean turned forty. She did say the women who participate are always, “a friend of a friend.” She didn’t go into great detail, but said they never have them at home. They always go to hotels in Vegas.

She captioned the photo of the Boomerang kiss, “me and my @tamrajudge.” Tamra Judge posted the same group shot shown below with, “fun night out.” Kary Britt of RHOD also joined the double dating pair for a pic. In the same episode where she revealed her and her husband’s penchant for inviting a third bed mate, the producers asked Braunwyn an enticing question. They wanted to know which housewife would be invited to Vegas with Sean and her. She quickly and enthusiastically said Tamra!

Not Everyone Thought This Was A Sexy Confession

When Braunwyn told the group at Miraval about the threesomes, Gina Kirschenheiter talked about it in her confessional. She said, “Good for her. Well, good for Sean, I guess. I hope they wrap it up. Seems like a really fast way to get an STD.”

Emily Simpson, who was also there at the time, initially came off as a little judgmental. She, however, clarified that she was not judging. She was just shocked as she processed this information.