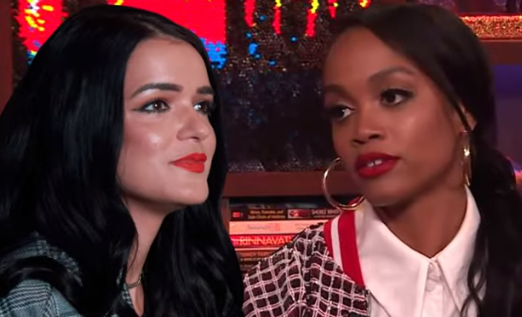 Even when the cameras are done rolling, the drama doesn’t stop for the Bachelor Nation. Some of the biggest fights come out after the final rose has been given. This is what happened between a former Bachelorette and her now, former best friend. Rachel Lindsay revealed some details about what happened between her and Raven Gates and fans are in shock.

Rachel Lindsay Can’t Give Details, But What She Has Said Has Been Pretty Big

#tbt to the Honeymooners in Mykonos. We made memories to last a lifetime. Thank you @aegonmykonoshotel

The friends met back in 2017 in Nick Viall’s season of The Bachelor, where they were both contestants. It seems a wedge has come between the two since then, Rachel discussed it on Bravo’s Watch What Happens Live, on October 2nd. A caller asked Rachel for the rundown on what happened between her and her “ex-friend Raven.” She didn’t look too pleased with the question but Andy Cohen, the host, said this is mainly what the fans are concerned with.

According to Elite Daily, he said she had promised she wouldn’t reveal the details of the falling out. What she did say hinted at a pretty big issue, “It was enough for me not to want to be friends with her.” Andy asked if they still aren’t friends, Rachel replied: “No, and I never will be.” Seems like there was some major drama between the two.

Rachel went on to lead her own season of The Bachelorette, after her time on The Bachelor. When the season began in 2017, Raven only had glowing things to say about Rachel. She even made a supportive Instagram post in honor of the start of her season.

“There’s a reason why we call her BIG RACH! SHE DOES BIG THINGS!!! @therachlindsay. My day one, my soul-friend, my person!! Not only is she making history by being the first African American female to have a bachelor/ette lead BUT she is MORE than that!! To list all of her attributes and qualities that I love would be too long to type. America will soon find out that She IS laughter. She IS friendship. And she IS LOVE. I am ALWAYS in your corner Rach! I love you so much!! now go show America what they’ve been missing!!!! & bring home the Love of your Life!!!!!!”

Clues Show The Feud Was Recent, But No One Is Sure How Recent

In the summer of 2018, Raven appeared on Rachel’s Instagram, they were vacationing together in Bermuda. This means the falling-out had to have been fairly recent. Rachel now no longer follows Raven on Instagram. Raven was also missing from the festivities of Rachel’s wedding to Bryan Abasolo this August. Other Bachelor Nation members were there, including some from Nick’s season, Astrid Loch, Whitney Fransway, and Kristina Schulman.

Though Rachel and Raven are no longer friends, Raven can still thank Rachel’s season of The Bachelorette for her love life. Raven met Adam Gottschalk on season 4 of Bachelor in Paradise  after he appeared on Rachel’s season of Bachelorette. The couple is now engaged. Details about the wedding haven’t been revealed yet, but it’s a safe bet to say Rachel’s name won’t be on the guest list.