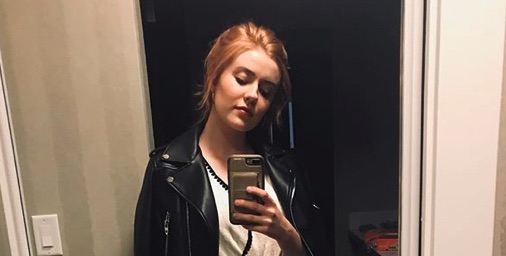 On Thursday, Nancy Drew star Kennedy McMann thanked Cosmopolitan for featuring her in their magazine. After numerous attempts at trying to turn the classic mystery series into a successful television series, it seems that giving the redheaded sleuth a fashion makeover and the right actress to portray her could be The CW’s secret success formula.

Why is Kennedy the perfect person to portray Nancy Drew?

unreal. thank you thank you thank you @cosmopolitan for putting lil ole me in your magazine. mini me in line at the grocery store dreaming of being in an issue of cosmo can barely believe it. 💖 feature in the October issue in print & online!!!! (link in my stories & bio!) HOLY SMOKES I’M IN COSMO!!!! • all the credit in the world to: editor-in-chief @jessica_pels entertainment director @maxwelllosgar author @emmabaty photos @tylerjoe stylist @ayakanai makeup @allanface hair @justinemarjan

The new Nancy Drew series should appeal to Riverdale and Sabrina fans alike. But, these are college-aged kids. This a intriguing reinvention of the classic teenaged sleuth, based on the Carolyn Keene mystery series that every girl, her mom and even great-grandma has read. But, there is a modern-retro feel to the styling of the show.

According to Cosmopolitan, shared by Yahoo, star Kennedy McMann explains that “Nancy’s not the prim and proper, perfect Nancy Drew you know from the 1930s books.” Things are going to be a little more wild. And a lot sexier. Much darker like Twin Peaks.

This is a college-aged group and pal George (Leah Lewis) is having a fling with a married man, who’s wife is “conveniently murdered.” Fans may wonder where the heck Ned (Tunji Kasim) is, as detective Nancy flirts with an attractive criminal.

Nancy Drew has been reinvented by the Dynasty reboot team of Josh Schwartz and Stephanie Savage.

Interestingly, Deadline reports another Dynasty connection. The original Fallon Carrington, Pamela Sue Martin, who also starred in a previous Nancy Drew adaptation back in 1977-1979, will be guest starring in the first episode as Harriet Grosset. Martin plays “a small town psychic” who helps Nancy investigate a murder. This all leads to Nancy’s new career as a sleuth.

This is a dream role. As a child, Kennedy read the mystery books and played the video games. Her fiancé nicknamed her “Nancy Drew.” The nickname came to be before the show was even in her line of vision. So, of course she took the role.

“It’s all very cosmic. If I could have picked one person to portray, it would have been her. It gives me shivers to even say that.”

Nancy Drew fans, are you going to catch the new CW series? Share your favorite Nancy Drew mystery in the comments. Be sure to check back with TV Shows Ace with the latest on CW shows. Nancy Drew  premieres on Wednesday on the CW.