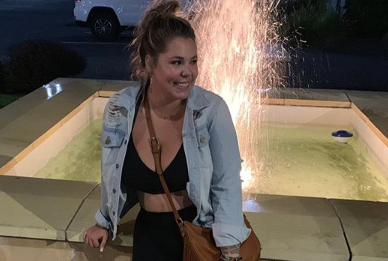 On Tuesday’s episode of Teen Mom 2, Kailyn Lowry made claims that her ex-husband, Javi Marroquin, cheated on his fiancé, Lauren Comeau during her pregnancy.

In the episode, Patrick, the MTV producer shows Lowry an Instagram post of Marroquin and Comeau’s engagement announcement. Kailyn said she knew it was happening but wasn’t aware he actually did it. Patrick asked if she was going to be congratulating them.

“No,” she laughed. “Congrats! Good luck, he’s been cheating on you since you were pregnant.”

The reality star also alleged that while filming the reunion episode in New York City earlier this year, Javi paid her a visit. In the clip that was never released, she told Leah Messer, “Javi came to my room at 6:30 this morning. Knocking at my door. I literally opened the door and I was like, ‘What the f–k?’”

Messer was curious about why he had come by. Kailyn Lowry claimed he had attempted to sleep with her and she rejected him.

According to UsWeekly, the couple was married for four years, 2012 to 2016. They have a son together, Lincoln, 5. Marroquin now had a second son with Comeau, Eli who is 10 months old.

Lowry Doesn’t Wish Bad On The Couple, But She Would Never Marry Javi Again

Later in the episode, Lowry told Vee Torres, that Comeau had tried to contact her about the allegations she had made about Marroquin. Torres is the wife of Lowry’s ex-boyfriend, Jo Rivera.

She said Comeau tried to give her a call after it was aired. Lowry believes he played it off but she’s unsure. She claimed to say she wouldn’t talk about the situation.

She added that Marroquin has expressed his desire to propose to Lauren to her. If Lauren trusts Javi, that’s good in Lowry’s opinion. She doesn’t wish anything bad on them. She doesn’t want to be with him.

On Wednesday, a new episode of her podcast “Coffee Convos with Kail Lowry & Lindsie Chrisley,” Kailyn Lowry discussed her thoughts on marriage. She said she would never marry Marroquin again. Chrisley asked if she would rather be married or not be married to the same man or woman three times.

“Never be married,” Lowry replied. “I could never, I would never marry Javi ever again.”

‘Bringing Up Bates’ Stars Josie & Kelton Balka’s Baby Is Here!
‘The Republic Of Sarah:’ Air Date, Cast, Trailer, & More
Hallmark’s ‘Crashing Through The Snow’ Is New Christmas In July Movie
Lifetime’s ‘The Seduction Of Joyce Mitchell’ & ‘Cellmate Secrets’ Tell Story Of New York Prison Break
Todd Chrisley Talks About People Who Stab Him In The Back