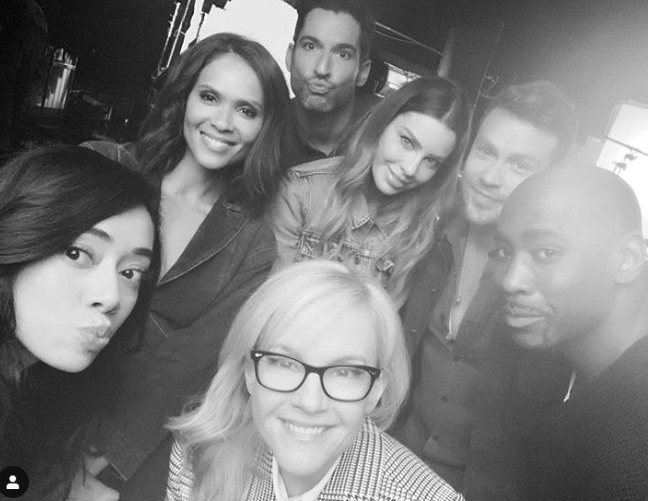 On Thursday, Lucifer showrunner Ildy Modrovich shared a BTW photo of Tom Ellis (Lucifer) and Kevin Alejandro (Detective Daniel Espinoza). What are the names of the first three episodes, some clues to the storylines and when will Netflix drop Lucifer Season 5?

The first episode of Lucifer Season 5 is entitled “Really Sad Devil Guy.” We can safely assume that Lucifer is unhappily stuck in hell. Then again, are we totally sure that the devil is unhappy? What is definite is that showrunners Joe Henderson and Ildy Modrovich already know what their first scene of Season 5 will be. Speaking to ET, Henderson endorsed it with his laughing comment, “which is one of my favorite things we’ve ever come up with.” The pair even muses whether the devil goes back to some bad habits living in hell.

The second episode of Season 5 is entitled “Lucifer, Lucifer, Lucifer.” Nothing screams a Brady Bunch-style family rivalry than this episode title. Who is coming down to argue with their brother Lucifer? Could it be the angel Michael? We don’t know this, but there has been a clue that there will be a very special guest star that is going to thrill fans.

On September 17, D.B. Woodside (Amenadiel) tweeted: “Yooooo!! You guys will NOT believe who we have making an appearance in episode two!!! I am blown away!!! I know I have to keep this secret but it’s sooooo hard!!!” Who is Woodside talking about? It is no secret that Mark Sheppard has been a name knocked about for a while. Sheppard and Joe Henderson have been exchanging tweets for years. Lucifer Season 5 is it. If there is a dream to bring in the talented Supernatural actor, then they have 16 episodes to do so. Could it be during episode 2?

Episode 3 is entitled “Diablo!” There are so many questions surrounding this episode name. Will a crime take place south of the border? Will Chloe and Lucifer head out for Taco Tuesday? One thing is for sure, Lucifer is definitely back on earth by this episode. That is, unless everyone else is helping him in hell.

On Monday, D.B. Woodside tweeted, “Today is gonna be a great day #Lucifans The brothers are working together.  #Lucifer #Amenadiel @LuciferNetflix.” So, we know that Amenadiel and Lucifer are working together, but we have more questions. Does this mean they are undercover? We know Lucie would be “Diablo,” but what is Amenadiel in Spanish? Could this episode be a telenovela, with a dramatic narrator, dialogue in Spanish, and English subtitles? Lucifans would certainly accept any of these options.

Thanks to social media, we also know that Scarlett Estevez (Trixie) is back for the first time in Season 5. Aimee Garcia (Ella Lopez) took a BTS video of Scarlett with Lucifer himself, Tom Ellis, doing jazz hands! Could there be a musical number? Thanks to Ildy Modrovich, we know that they are filming in Lux.

We also know that Lesley-Ann Brandt (Maze) is going to have a pretty big fight scene. On Wednesday, Anisha Tee Gibbs, Lesley-Ann’s stunt double, showed up to the set. That means Mazikeen is gonna have a big fight! On Thursday, Brandt showed her arm owies from the intense fight, with her son there dispensing the ointment.

🔥😈🔥!! Is Lucifer going by a new name, @MikeCosta ??🤔 Or going to Mexico? 🇲🇽 #LuciferNetflix #Lucifer pic.twitter.com/gwBXlpPkql

When Is Lucifer Season 5 Returning?

Right now, the big question is when Lucifer Season 5 is scheduled to return. Filming should end sometime in March 2020. Right now, it is not clear if Netflix will divide the 16-episode season into two parts, or if they will drop it all at once. We most likely will not know anything until late winter or early spring 2020.

Lucifans, are you getting excited for Lucifer Season 5? What sorts of episodes do you want to see for the final season? Share your ideas in the comments field and check back with TV Shows Ace for the latest with Lucifer. The supersized Lucifer Season 5 will drop sometime in 2020.